Radio Active comes to Bromsgrove as part of a nationwide tour, following a sell-out and critically acclaimed run at the Edinburgh Festival Fringe. 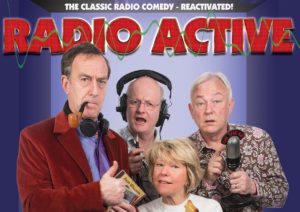 Among other classic characters expect to catch up with long suffering radio host Mike Channel, original foodie Anna Daptor, and the accident-prone Martin Brown, as well as the cast’s original musical creations, responsible for such parody bands as the Hee Bee Gee Bees and Status Quid.

Based on the sketch show created during their years in the Oxford Revue, “Britain’s first ever national local radio station” was written by Angus alongside Geoffrey Perkins, and ran for seven series before transferring to television in the form of BBC2’s KYTV.

All surviving members of the original cast reunite for this tour marking forty years since its stage debut including Angus Deayton (Have I Got News For You, One Foot In The Grave), Michael Fenton Stevens (Benidorm, Outnumbered), Helen Atkinson Wood (QI, Have I Got News For You) and Philip Pope (Ballot Monkeys, Brian Pern).