Armed forces veterans will again be treated to VIP travel to the annual Remembrance Sunday parade in Knowle this year, thanks to the continuing generosity of a Solihull executive travel company.

LandFlight is maintaining a long-standing partnership with the village’s branch of Royal British Legion by laying on a complimentary, low-floor bus to transport ex-service personnel to the town’s Remembrance Day service next week.

It’s a tradition that stretches back almost forty years with LandFlight transporting hundreds of former soldiers, sailors and air crew to the occasion over the years. This year’s service is a particularly poignant one as it marks the centenary of the end of the First World War. 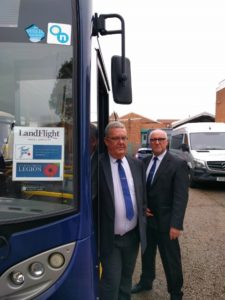 LandFlight director Danny Matthews explained: “The company has been helping Knowle’s Royal British Legion Association for almost 40 years now and we will continue the tradition for as long as we are required.

“It’s an honour and a pleasure for us to be able to support them by donating a driver and bus so their members can attend this very important day in their calendar.”

Knowle Royal British Legion chairman Ray Warren added: “We are very grateful to LandFlight for laying on a bus to help those who need transport to the parade.

“It’s so important for us to pay our tribute to the service men and women who have made the ultimate sacrifice for this country. Last year we had 845 people attend the parade in Knowle, which was a tremendous turn-out from people in the village and the surrounding areas.”

The bus will depart from the Legion’s headquarters on Warwick Road at 9.45 on Sunday morning to transport members to Knowle Parish Church on the High Street. The coach will make the return trip after the ceremony concludes around midday.

LandFlight will also be involved in the Remembrance Day proceedings at the National Memorial Arboretum at Alrewas in Staffordshire this year. They are sending three buses to provide a shuttle service from the car parks to the memorial centre for those attending the Remembrance Service at the Arboretum.