Running any sort of independent business is difficult in an era of increasing corporatism, particularly in the music industry. That’s why the Robin 2 at Bilston is such an important part of the local scene. Owner Mike Hamblett has a book out soon titled Keepin’ Music Live and we spoke to him about it, and about the venue it inspired.

You started out as a musician yourself.

“I was in a band called Ocean, who became Ocean Boulevard, then Sub Zero, who as a three-piece were likened to the Police a lot. I was about thirty odd and I wanted to do my own business. The band finished and I’d got the PA system so I started doing that at night and during the day I carried on with a record label that I’d started for the band. I was working from my mum’s front room, I’d got two trucks in the driveway. Good days.”

You started the original Robin in?

“1992. I did a bit of promoting at the Woodhayes at Kingswinford then an old schoolfriend took on the Robin Hood at Merry Hill. The back room there was the old Citizens Theatre where the Black Country Night Out show was based and I thought it would be a great gig. I had a spare PA system that I put in and booked some acts and it all started from there. My mate wasn’t coping well with the bar side of things so I went to the brewery and took it on myself.”

You ran that and the Robin 2 together for a time.

“From 1998 until 2003, then I had a problem with the lease of the Merry Hill one and a property developer bought it. It was too much to run them both and the PA company at the same time. I don’t know how people can run dozens of businesses – for me it was just too much. It turned out to be good that the first one closed.”

You must have a million stories to choose from for the book.

“I’ve never looked back at anything I’ve done, but the book made me. I read the JB’s book on holiday then I had a chance conversation with a writer and that’s how it started. Since I wrote it a lot of other stories have come flooding back and I’e wondered why I didn’t put them in.” 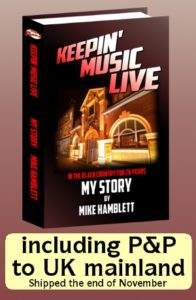 Do you have a favourite memory from either venue?

“Luther Allison at the old Robin was absolutely one of those nights. It was about 1994, he’d played in Ireland the night before, the tour bus turned up and the band just got off and played about three and a half hours. Absolutely knackered they were and it was one of the best gigs ever. Absolutely amazing.

“For different reasons there’s good gigs and there’s memorable gigs. Steven Seagal, for example. That came about by fluke. I get hundreds of emails a day from all over the world and someone offered me Steven Seagal. I thought ‘I know that name’ and I recognised the picture so I followed it up. Weeks of negotiation and it actually happened. Just to have him here; he went outside and there was crowds out there. Steven Seagsal in Bilston…”

On a similar theme you had Lenny Henry when there was a bit of controversy over the name of his band.

“Poor White Trash and the Little Big Horns. It was a great band, again it’s in the book. He had this world-class band round him. Andy Gangadeen, he’s played with the Spice Girls, a really serious good quality drummer. The keyboard player was Sophie Elton, Ben Elton’s wife and he came to one gig. It was weird seeing him walking around. Then at the old Robin Chaka Khan turned up, her sister was married to Howard McCrary who was a fantastic singer living locally.”

You must have had some bad nights, or do you not talk about them?

“We’ve had a few. You get some quality shows that for whatever reason people don’t come out. It happens.”

And some that got away. Bo Diddley for example, he was booked and the tickets were on sale then he was taken ill and didn’t recover.

“Yes. I’ve still got the posters. That was a shame because we do a lot of different acts but the core, what we stared as was blues and r&b. I had to diversify else I wouldn’t be in business now. Joanne Shaw Taylor, I think her first ever gig was supporting Walter Trout and now she’s paying Symphony Hall. There’s been a few like that, who’ve got too big for us. We had Steve Hackett play here a couple of times but he’s become a huge solo act. Paul Carrack, he’s got a new agent so he doesn’t play here anymore but we had a great ten or fifteen years with him. Eric Burdon, that one was a hard sell. The guy I booked him off I’ve been dealing with for twenty-five years and we still have a good relationship.”

Of course, the common perception is that promoters are always coining it on.

“Oh no, if you’re after a quick buck don’t become a promoter. It’s not a science, it’s your gut feeling and you still get it wrong after all these years.”

But you’re still surviving when so many others have fallen by the wayside.

“You’ve got to move. We’ve got a reputation and we have to keep it. You can’t sit back – you’re only as good as your last gig and you have to keep trying to find new acts and new ideas. A lot of the chains like the Academy group have got things sewn up; they can offer a whole tour with one phone call but we have to fight against that and we try to be different.”

How about a Robin 3 and starting your own chain then?

“No thanks. I’m coming up to my sixty-fifth birthday and I’m nearing the end of my working life. I actually sold the business to a local bloke two months ago. He approached me and the negotiations took about a year. I’ll step away eventually but for the foreseeable future I’m still here. I work a seven day week, ten hours a day and I can’t do that forever. To keep this place going is like feeding a big monster but that’s what you have to do to keep it going.”