West Bromwich Albion manager Darren Moore has teamed up with Solihull Junior School to help raise more than £8,000 for charity.

Football-mad Solihull pupils donated money to take part in an exclusive coaching session with the Baggies boss, who also donated a football signed by Championship side West Brom to the raffle. Other fundraising activities included a photo booth, a book sale, a giant tuck shop, a talent show and a Monitors versus Staff’football match. 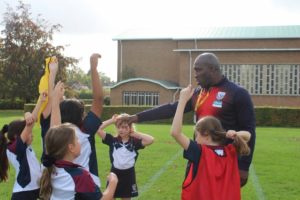 The money raised will be shared between Heronfield Rescue Centre and the KidsOut Giving Tree Appeal. Mark Penney, Head of the Junior School at Solihull, said: “Heronfield is a popular, local shelter which provides care for a variety of unwanted animals including llamas, alpacas and snakes, as well as more typical farm animals and pets.

“We are also supporting the KidsOut Giving Tree Appeal by providing more than 500 presents for children who will spend Christmas in Women’s Aid refuge across the greater Birmingham area.”

Appeals to donate second hand trainers and spectacles were also made on behalf of Assist RR, a charity the school has developed a close relationship with and which focuses on assisting innocent victims of war in Sri Lanka.

“The response was remarkable,” said Mr Penney. “In total, we collected 1,135 pairs of glasses and 255 pairs of trainers, which will now be sent to an eye clinic and schools in Vanna and Kilinochchi respectively.”