Commuters at Birmingham Snow Hill are being encouraged to consider safety and security on railway this week, as an interactive roadshow heads to the station.

London Northwestern Railway’s revenue and security team will be joining colleagues from the British Transport Police, Network Rail and others for the event, which is taking place on the station concourse. 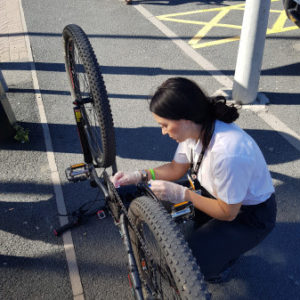 On Wednesday 10th and Thursday 11th October, the team will be demonstrating some of the initiatives currently taking place to promote safety and security. These include steps to reduce thefts, such as cycle marking and bells for bags, as well as tackling issues such as graffiti, trespass and suicide prevention on the railway.

The event will also include the beer goggles demonstration. This involves participants putting on a pair of special glasses that show the effect of consuming alcohol and the potential dangers of this at the station.

The public will also be reminded of the See it, Say it, Sorted campaign. This ongoing initiative encourages people to report suspicious behaviour on and around the railway, so that potential issues can be dealt with quickly and efficiently.

Nicola Harrison, revenue and security manager for West Midlands Railway said, “There’s a lot of work going on behind the scenes to keep passengers safe on the railway, and these roadshows have always been an engaging way of letting people know what we are up to. We work closely with our partners to deliver a range of initiatives, and the support of passengers is a key part of this. We would encourage anyone heading through the station to stop by for a chat with us this week. We will also have plenty of freebies to give away.”