The Shiiine On: Birmingham one day festival has just got bigger with the addition of members of one the most iconic Midlands bands of a generation.

Jonn Penny and Rat from Stourbridge’s Ned’s Atomic Dustbin will be performing the huge one day festival at Birmingham’s 02 Academy under the moniker Ned’s Acoustic Dustbin. The duo have just completed a twelve date sold out tour across the UK with the full band alongside The Wonderstuff.

The band join a stella line up of acts which sound tracked a generation including dance pioneers Orbital, Britpop heroes Shed Seven, Embrace and Cast and the one and only Happy Mondays. 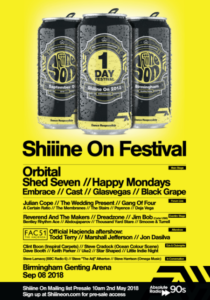 The event will also see performances from the likes of Julian Cope, Reverend And The Makers, The Wedding present, A Certain Ratio, Glasvegas and both members of Carter USM as Jim Bob plays solo and Les Fruitbat plays with his new project Abdoujaperov.

Also featuring on the bill is A Certain Ratio, Bentley Rhythm Ace, The Stairs, The Membranes and a Thousand Yard Stare. Local bands Ivory Wave and Psyence complete the line-up.

Ticket prices include free entry to two special after-show parties. The Hacienda will descend on Birmingham with Todd Terry headlining a superb line up alongside Marshall Jefferson and Jon Dasilva.

There will be DJ sets from, BBC Music’s Steve Lamcaq and Star Shaped who bring us their Britpop disco. They will be joined by Ocean Colour Scene’s Steve Cradock.