Andy Munro tests the water at the Moseley Folk Festival.

I’d never been to the Moseley Folk Festival before, but decided that it would be a more convenient first ever festival experience than the likes of Glastonbury, given my OAP bus pass and the proximity of the 50 bus route. I went on the Friday and Sunday both because of the line=up and and also because of the small matter (and it turned out to be a VERY small matter) of the Blues v QPR fixture.

The two days were a very chilled out experience and sniffing the Moseley air, it didn’t appear to be because of over use of Amsterdam’s finest. Mind you, disappointingly,the Ffstival did run out of real ale on the last day leaving lager (thankfully not Carling) as the only real alternative. 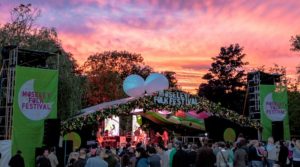 On the Friday, the headline act were the Levellers and they didn’t disappoint with a superb set. As with many festivals, the highlight must probably be hearing new bands and being introduced to new music. On that note, on the first day, there was a folk rock band called Skinny Lister, impressive enough for me to invest in their CD…if only they knew what an accolade that was.

They were one of the many bands much appreciated by an eclectic crowd. Surprisingly, though, I only saw one Jeremy Corbyn tee shirt although there was a rash of B*llocks to Brexit stickers. In fairness, the latter is a sentiment I have much sympathy with. Another surprise were the food outlets where dirty burgers (whatever they are) and kebabs far outweighed the veggie and vegan offerings. Mind you, the day before I’d had an upset stomach and, on that note, and without going into gory detail, my advice to any festival goer is NEVER go (as I had to), to the portable toilets at the very end of a busy day!

Sunday was equally as good musically as the Friday with the ‘big’ acts Steve Harley and Cockney Rebel and Teenage Fan Club. Steve Harley was absolutely outstanding with not only strong renditions of Judy Teen, Mr Soft and Come Up and See Me, but a number of really poignant songs as well. In my mind, they should have been the headline act rather than the Scottish rockers Teenage Fanclub who , to me, sounded like a poor man’s Big Country – a comment that will probably enrage the unfortunately named Fannies everywhere.

One final mention for the excellent Steve Gibbons, who did a solo set on the Kitchen Garden stage. Probably in his late seventies, our local hero showed a great dash of humour in an excellent set which included several songs about local life although it was a bit disappointing that he didn’t end up with something from his Greatest Hit catalogue, Tulane.

Will I be going next year? You bet!