Stephen Pennell celebrates in style with the best of Birmingham music.

I’ve rarely had such an eventful or elongated birthday celebration. Over the course of eight days I had tickets to see Paul Weller at the Genting Arena; a table for dinner and a hotel stay in my favourite city in the world; hippie icons Peace playing at the Godiva Festival in Coventry; and Lady Sanity live on the last leg of a nationwide tour.

The first two instalments went well, although I nearly aborted the Weller gig by returning my tickets due to the insufferable tardiness of monthly paydays. It was only while I was on hold waiting for my refund to be confirmed that the full horror of missing my life coach play ten minutes from my yard hit home, and I ended up withdrawing the money I got back for two tickets and exchanging it for one off a tout. The bloke who was supposed to be going with me wasn’t impressed but maybe he’ll organise it all next time.

I’m really glad I had a change of heart about going. From the opening riff of White Sky to the absolutes scenes that greeted A Town Called Malice, the whole gig was a thunderous triumph, covering almost every aspect of his forty-odd years of making beautiful music. While the Guvnor is starting to look his age, his enthusiasm for live performance remains undimmed, his voice is better than ever and the next album (his 26th!), promises to be a masterpiece.

The next day, me and Wifey’s romantic dinner and hotel stay at the Mailbox was lovely, but if you think I’m reviewing that you’ve got another think coming. Suffice it to say that while I’m starting to look my age, my enthusiasm for live performance remains undimmed. And no, I haven’t got an album coming out.

Onto the next weekend and seeing my favourite current band, Peace, for the first time. I’m still kicking myself that years ago I missed one of their earliest gigs by preferring to stand outside smoking and drinking while they played in some little Birmingham boozer, the name of which escapes me now. I do recall guitarist Doug Castle coming out and ordering a rag-tag collection of disinterested fag-heads inside to watch them, telling us that his band were “better than The Beatles”. I told him that I didn’t like the Beatles and stayed outside. My loss. 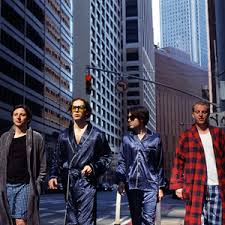 I was a bit more eager to see their appearance at this year’s Godiva festival at Coventry’s War Memorial Park. I liked the band’s first two albums, but I absolutely love their latest, Kindness Is The New Rock And Roll, and it’s probably the first album since Weller’s Stanley Road that I can sing to myself all the way through while pottering about at the pallet depot, pretending to work.

Packed full of great tunes, clever lyrics and anthemic choruses, it also conveys a message of love and peace that really is what the world needs now. Such was my enthusiasm, I was listening to the former Digbeth night-life regulars via the aux in the wife’s car as she dropped me off at Marston Green station. The Coventry train was at the platform as we pulled up and I unplugged my phone and jumped aboard.

It was only as we moved off that I realised that the phone, now in my pocket, was still playing Lovesick from the band’s debut album. As I retrieved it to turn it off (I’m not twelve and hate it when I’m forced to listen to others people’s invariably rubbish music on public transport), a few of my fellow passengers joined in with the last chorus. I was encouraged to play further requests and the impromptu Peace karaoke continued all the way to Cov.

I arrived at the park an hour before the band were due on stage, spotted a gap along the fence right at the front and claimed it. I was thirsty, but not thirsty enough to give up this prime position, so I put out a hopeful message online for somebody to bring me a drink. I soon felt a hand on my shoulder and turned around to the welcome sight of my mate, a performance poet and fully-qualified Archbishop, standing there with a much-appreciated pint of lager. How generous of him and, indeed, intrepid.

Peace took the stage to loud cheers and started with a lively Lovesick that got the huge crowd straight into it, then followed up with the new album’s opening track Power. “I’ll whisper in your ear/I’ll swallow all your fears/I can lick my lips and make the darkness disappear,” sang Harry, and I for one believed him.

Money and Lost On Me, two tracks from their second album Happy People, had the crowd roaring back the lyrics, and then I admit I got a bit sentimental over California Daze, which I interpret as a paean to Zombie Prom nights at the Rainbow, days in pigeon park, and that ex-girlfriend you can’t get out of your head. We’ve all got one haven’t we?

Then it was back to the new stuff with the riff-tastic You Don’t Walk Away From Love and the emotional Magnificent. The mosh pit was in full effect for Bloodshake and Wraith before the more reflective From Under Liquid Glass, (Francis Cobain’s favourite song of the decade) closed the show. Roll on Digbeth Institute in November.

I was back on home turf the next night as Erdington MC Lady Sanity ended her nationwide tour with a sell-out show at The Flapper. I had ten tickets for this one as I won’t rest until everybody I know realises just how brilliant she is. I caught the train at Marston Green again, this time travelling to New Street, with text messages pinging between cousins, friends and my kids as I organised pick-up points and directions.

We got to the venue in time to see all four supporting acts with Sanity warmly introducing each one and giving them all a big build up. They were all enjoyable and undoubtedly talented, but when the Lady herself took the stage things moved up to another level.

Opening with They Won’t Hear A Word from her recent For Figures EP, she had the home crowd on her side straight away. This was followed by Role Models, which built into a crescendo of hype bars and the whole room bouncing up and down to the chorus. Sanity split the crowd into two sets of backing singers for the next track, a cover of Tupac’s Do For Love, and she finished with the fantastic Fro’z, after which there was prolonged cheering followed by everyone in the room chanting her name.

She’s so modest, she looked embarrassed. Her lyrics throughout were profound, conscious, intelligent and inspirational, and as I said to the camera crew who collared me after the show, she might not be the best rapper in the country, but she’s definitely in the top one.

So, for my birthday this year I saw great gigs from acts who at first glance don’t seem to have much in common. It’s true that they vary widely in age and genres, but look a little deeper and it strikes me that Weller, Peace and Sanity all have a positive message that the world needs to hear, and all three deliver with a level of skill and conviction rarely matched in modern music. More Power to them.