“I have treated the EU with nothing but respect,” claims Theresa May. Steve Beauchampé thinks otherwise.

All it took was a couple of strategically positioned Union Jacks and few patriotic phrases delivered in a steely tone from No. 10 Downing Street and the portrayal of Prime Minister Theresa May’s Salzburg Brexit trip was transformed from that of a self-inflicted disaster to a nationalistic rallying call that was swiftly taken up both by her allies and foes alike within the Conservative Party.

A dutiful media also chipped in, with Saturday’s newspapers – whether their politics be right, left or indeed even more to the right, evoking Boudica, Churchill, Dunkirk or Margaret Thatcher in support of the beleaguered May. Prompted by several perceived sleights towards her during the two-day meeting of European Union leaders in Austria, May claimed that: “Throughout this {Brexit} process, I have treated the EU with nothing but respect.” 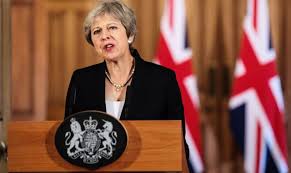 Nothing but respect…really? Such as when she stood in Downing Street during last year’s General Election campaign and stated that the EU were: “attempting to interfere in the UK General Election” (a claim which she failed to back up with any facts).

Or such as when, after keeping the EU waiting for more than two years, she finally delivered an exit strategy in the form of the Chequers Agreement that showed no apparent understanding of the four fundamental tenants that underpin the principles of the European Union.

Or such as when she sent UK Government Ministers around Europe during the summer in an attempt to undermine the solidarity of the other 27 EU leaders over Brexit. Or such as when she delivered her ten minute address over dinner in Salzburg on Thursday evening by apparently reading out a recent newspaper article that the other leaders had already had sight of.

And such as how, when it comes to Brexit, Theresa May has continually treated the Republic of Ireland with precious little respect. Having repeatedly failed to even consider the problems that the UK leaving the EU would cause the one country with whom it shares a land border, the Prime Minister only informed Irish Taoiseach Leo Varadkar at a meeting early on Friday that she would not be able to propose a solution to the border issue in time for the EU’s crucial October summit (having already missed the July deadline!).

And we could add to all of these Theresa May’s regular intemperate language implying that the EU need to step up their efforts and find solutions to problems that are almost entirely of the UK’s own making.

When it comes to Brexit and respect things are not much better amongst politicians across the political spectrum. An increasing number of senior political voices now want a second referendum (despite the UK’s failure as yet to even implement the result of the first one). In the Labour Party most New Labour-supporting ‘centrists’ are agitating for a re-run of the 2016 vote, although what the darker consequences of so blatantly disrespecting – indeed trashing – the wishes of a sizable proportion of the British electorate might be is probably incalculable.

And it’s not just concerning Brexit where many of these same Labour figures seem to have a problem with respecting democracy. The notion that sitting MPs should face open selection contests horrifies some, many doubtless fearing that they might lose their prised and very lucrative positions under such a system.

MP Chuka Omunna recently protested about the passing of votes of No Confidence by party activists against several mostly anti-Jeremy Corbyn MPs. Yet Chuka showed no such reticence back in 2016 when he supported a No Confidence vote against Corbyn and subsequently campaigned for Owen Smith as Corbyn’s replacement.

Of course, politics is full of hypocrisy, double speak and disrespect. Some of this may be unavoidable, the consequence of an adversarial political system and our asking or expecting too much of mere mortals who sometimes have more than one type of electorate to satisfy. But sometimes, as with the Prime Minister in Downing Street last Friday, the hypocrisy is inexcusable and needs calling out.