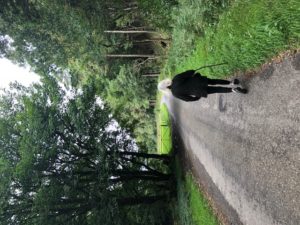 Richard Lutz takes a wander through a small valley.

There is a small constant fluttering in the beech hedges that patrol both sides of the road. It’s the flickering of birds. They’re like the beating of a thousand tiny hearts hidden in the foliage: finches, swallows, wagtails. They fly off in front as if guiding you through this part of southwest Scotland, the fabulesquely-named Valley of Tig.

It takes in a wandering stream that comes off the large rounded hills behind the port of Ballantrae and eventually joins the River Stinchar, famous for its salmon fishing. Here’s a forgotten rickety bridge that, despite its broken back, seems to just make it over the bubbling Water of Tig: 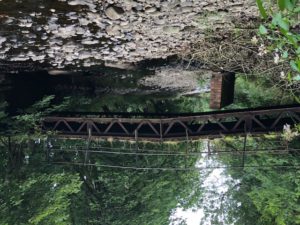 The hedges patrol both sides of the empty road that passes farms with names that leap straight out of Hobbitland: The Mains of Tig, Bellimore On Tig, Shalloch on Tig and a small way on….Wheeb.

Below the hedgeline, mostly on the north bank that catches the southern slant of sunshine, wild flowers pave the way. There’s late summer’s ragged robin, there’s vetch and campion, there’s shoulder-high teasil, yarrow and the aromatic pineappleweed. Red honeysuckle twists around the hedges and tree stumps.

Many of the colours this side of late summer are violet and blue. But meadowsweet remains  a pale white. Crush its bushy flowers and a deep perfume is released. It’s such a delicate fragrance that it’s known as a strewing herb; in other words, a plant that’s strewn on the floor to sweeten a home. No wonder that through the ages it has also been called Queen of the Meadow, Pride of the Meadow, Lily of the Meadow and, for some reason, also called, unpoetically, dollof. Here it is: 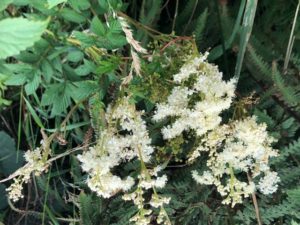 The road joins the larger Stinchar Valley and winds down to a blue and green Clyde estuary. An horizon is outlined by a misty Mull of Kintyre, the Isle of Arran, the volcanic Ailsa Crag looming in the sea and, further south, the faint hint of Ireland. The only sound is a piercing call of an overhead hawk. It’s a slow lazy walk from Colmennell to the port of Ballantrae; in the fields, bullocks kick, lambs get chubby, a bull ignores everything.

The hills around are tilted, askew, rounded, fifteen shades of green. Two massive continental plates once bashed into each other around here and squeezed an ancient ocean floor up to create this landscape.

That was about 450 million years ago. A long, long time ago. And it puts Brexit, tomorrow’s dubious weather and the price of a new lawn mower into a ludicrously minute crevice of time and space.

One thought on “In the Valley of Tig”