There’s another great season of comedy coming to the Artrix Arts Centre in Bromsgrove, with acts straight from the Edinburgh Fringe Festival and plenty of local talent.

Kicking things off is The All-New Scummy Mummies Show (front page pic) on Friday 14th September. If the summer holidays have well and truly finished you off and you’re reaching for the wine at teatime, then this brand new comedy show with songs and sketches that celebrate the scummier side of parenting is a great night out for mums (and dads!) just like you. Recommended for ages 18+. 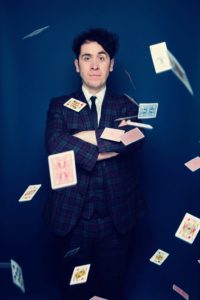 is seventy this year, but will she make the ton? Dr Phil charts the course of the NHS from 1948 to as long as she lasts! Recommended for ages 14+.

One of Britain’s leading one-liner comics Gary Delaney returns to Artrix on Thursday 20th September. There’s already limited availability for this show, so an extra date has been added on 28th February 2019. Recommended for ages 16+.

Pete Firman (pictured) is the UK’s leading comedy magician and a TV regular. Hot from the Edinburgh Fringe Festival, he comes to Artrix with his show Marvels on Wednesday 26th September. Recommended for ages 14+.

Award-winning comedian Scott Gibson comes to Artrix on Friday 28th September. The Big, Bald, Bearded Glaswegian brings his show Anywhere But Here to Bromsgrove as the only West Midlands date on his UK tour. Recommended for ages 16+.

For tickets or further information about any of the comedy gigs at Artrix this September visit www.artrix.co.uk or call the box office on 01527 577 330.