The Artrix arts centre is not only renown for live events, it’s also home to Bromsgrove’s only cinema. Screening the latest family blockbusters and musicals alongside award-winning dramas and foreign language films, Artrix Cinema has something for every film fan.

As well as screening many of the latest feature films and more unusual offerings, tickets are a snip at just £7 for standard tickets, £6 for concessions and £5 for tickets to family film screenings.

Escape to a Greek island (bring your sequin flares and best singing voice!) for a week of screenings of Mamma Mia! Here We Go Again from 3rd to 11th August. Other 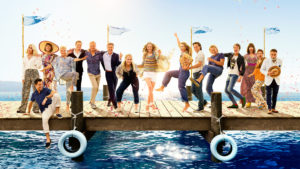 Hollywood blockbusters include the thirtieth anniversary re-release of the 80s classic, Heathers on 3rd and 4th September, followed by The Escape starring Gemma Arterton and Dominic Cooper on 7th and 10th September.

Artrix Cinema takes place in the arts centre’s 300 seat Main Auditorium. Audiences can expect a relaxing cinema experience in the comfort of the accessible, theatre style raked seating, along with the luxury of a pre-show bar with reasonably priced snacks and beverages available.

For details of all future films and screenings or to book tickets visit www.artrix.co.uk or call the box office on 01527 577330.