Making hay while the moon shines.

Lunar Festival, one of the UK’s most exciting and diverse music and arts events, has announced a Thursday line-up – new for 2018 – exclusively available to 500-weekend pass holders. 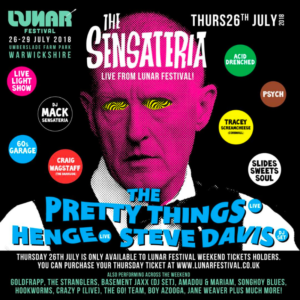 The Early Settlers ticket offers access to campers, along with entry to a special line-up curated by famous Birmingham psychedelic club experience The Sensateria, headlined by seminal English psych-rockers The Pretty Things, who bring an incredible 55-year career to a close with a farewell tour in 2018. This will be one of the last opportunities to catch the band in a festival setting.

Tickets for the Thursday night offering can be purchased by weekend pass holders only at the official Lunar Festival website.

Weekend tickets for the 5,000-capacity Lunar Festival, based near the picturesque Warwickshire village of Tanworth-In-Arden just thirty minutes south of Birmingham, are also on general sale now.

Committed to staying small whilst thinking big, the 2018 edition of Lunar Festival welcomes the introduction of Lunar’s Seven Elements: Learn, Listen, Taste, Relax, Laugh, Move and Create – placing creativity, community and celebration at the heart of an exciting and diverse programme.

New for 2018, the Journey To Nutopia project will play host to futuristic talks and workshops through the day, broadening minds and changing perspectives. By night, this venue will see high-calibre DJ sets from the likes of dance music icon, A Guy Called Gerald, performing a live acid jam session, and one of Britain’s first house sound systems, DIY Soundsystem, hosting the Friday night. Also making an appearance to bring a Nutopian electronic-meets-spoken-word set to Lunar is Richard Norris.