Birmingham’s tourism sector witnessed its most successful year in history last year, with hotel revenue, visitors numbers and visitor spend, all standing at a record high.

The figures released today by the West Midlands Growth Company and research body Global Tourism Solutions, reveal Birmingham welcomed 41.8 million visitors in 2017, with subsequent visitor spend reaching £7.1 billion – an increase of over nine percent in the space of a year. Average hotel occupancy stood at 75%, matching the previous record set in 2016, whilst RevPAR (revenue per available room) was £51 in value, the highest figure ever recorded.

The city welcomed the most tourists during September, a month that included major events such as the Natwest T20 Finals Day at Edgbaston Stadium and Birmingham’s largest outdoor festival, the Birmingham Weekender. The region’s literary heritage was celebrated as 2017 marked the 80th anniversary of JRR Tolkien’s classic fantasy novel The Hobbit. Heritage was also the sub-sector to see the greatest increase in visitor numbers, up 12% on 2016.

Leader of Birmingham City Council, Cllr Ian Ward, saidd: “Tourism is a major part of the Birmingham economy, supporting thousands of jobs, and these outstanding figures underline the fact that this city is now a major tourist destination, with a growing profile on the global stage.

“Increasing numbers of visitors come to Birmingham every year and many return time and time again, thanks to our arts and culture, our fantastic food, our sporting offer and because they know they are guaranteed a warm welcome.”

The announcement of the latest figures coincided with a visit to the region from Michael Ellis, Minister for arts, heritage and tourism (front pic). The visit marks the arrival of a prominent new tourism project to the area – England’s Waterways, supported by the Discover England Fund. The project, led by the West Midlands Growth Company, will inspire international visitors to explore the canal networks and surrounding cultural offer throughout Birmingham and the wider Midlands region.

The Minister commented: “Birmingham is one the UK’s leading destinations, with excellent attractions, nightlife and hospitality. Following the hugely successful Commonwealth Games handover and the arrival of Dippy the Diplodocus, this positive tourism trend looks set to continue well into the future.

“The wider Midlands region boasts a charming canal network surrounded by vibrant green spaces and unique heritage attractions. We are pleased to be helping to attract even more people to experience these picturesque waterways through our Discover England Fund”.

Over the last ten years, Birmingham has attracted growing numbers of overnight visitors. The total number of staying visitors has increased by a third (1.2 million) since 2008. The top destinations visitors are travelling from include Ireland, Germany and the US.

Neil Snowball, Chief Executive of Warwickshire CCC, said: “The biggest sporting and cultural events come to Birmingham because of the outstanding experience that is provided by the city stakeholders working together in partnership. The warm welcome and logistical ease is something that is reported time and again by visitors to Edgbaston. 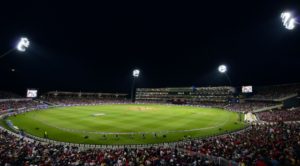 “Last year, the stadium hosted five games in the ICC Champions Trophy, England’s first ever Day/Night Investec Test match and NatWest T20 Blast Finals Day, which was predicted to have generated around £45 million towards the local economy. We’re thrilled that Edgbaston could play such a major role in Birmingham’s leisure offering last year.

“With test matches against India, Australia and the ICC Cricket World Cup on the horizon, we can look forward to continued momentum in the city’s tourism offering”.

Mark Payne, General Manager at Park Regis Birmingham, added: “These record-breaking figures highlight the growing potential of the UK’s second city. Birmingham is home to a thriving food and hospitality offering, with a globally renowned arts and culture scene, underpinned by the City of Birmingham Symphony Orchestra and The Birmingham Hippodrome. The recent handover for the 2022 Commonwealth Games has made it very real and clear that Birmingham is the city to watch.”

“In addition, Birmingham is fast becoming the first choice for delegates – and we can’t wait to welcome them.”