Simon Evans is a comic, scriptwriter and has appeared on TV & radio in such programme as Mock the Week and The Mighty Boosh. he’s about to start touring his Edinburgh Festival show Genius, in which he beamons the modern lack of…go on , have a guess.

You’re going back to a show that you debuted last year. Does it stand up well?

“I played it in Edinburgh in August 2017. I haven’t even looked at it since then so I’m going to have to re-acquaint myself. The first gig is in Leicester on February 10th and it’s getting increasingly urgent that I get out the tapes. I’ve got a horrible fear that it was brilliantly topical back then but that doesn’t stand anymore.”

You couldn’t really think up anything funnier than what’s happened since.

“The thing about the show is that it’s like a micro-approach. I like a Giles cartoon-type approach, looking at world events and then how they’re viewed in the context of your own family. While the show is about my thwarted ambition to be recognised as a man of genius in my own lifetime, while approaching your fifties there’s that feeling that you reached the top of your arc some time before.

“But while I’m aware of my own shortcomings it’s the downcrying of aspiration to genius in public life, in anything that anyone would admire as an ambition and that’s a genuine complaint of mine. There are obvious targets such as Trump but I think it’s more obvious in the rank and file of the government, the sort of people on Question Time, or who are standing in the wings as the government-elect. Trump is this example of someone who isn’t a politician, but there’s not enough evidence that there’s someone better.

“You can look back at Election Night Special in 1974. Robin Day was hosting it and there was Enoch Powell, Jim Prior who was a pro-European Tory and Dennis Healey, and the quality of conversation was so much better. The ability to interpret and answer the question instead of giving soundbites, the lack of media training more than anything else. They would interrupt each other but they were quite jovial about it and people responded to what they said. 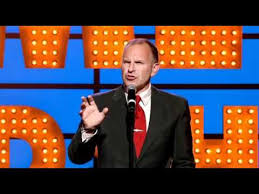 “Talk about dumbing down now but there’s one example in the Guinness Book of Records. It used to be full of facts about the most distant point in space at any given time in the last three centuries or the largest examples of different vegetables in the British Isles. Now they have a double page spread on Ed Sheeran. It’s this kind of garish dumbing down. I don’t want it to become a political lecture. What I want is to put across isn’t about left or right, it’s about the quality of debate generally.”

“You have Theresa May, who is so woeful and then opposing her is someone who got two Es at A level. That doesn’t strike me as the kind of intellectual firepower that can handle the economic control of a country in a way that has never worked anywhere else.”

What, or rather who, would be a genius to you?

“Genius is about creating unexpected pure creativity out of nowhere. The incomparable genius of Lennon and McCartney’s songwriting isn’t as important to their reputation as the incorporation of a fairground organ or a music-hall song in their music. Maradonna was a an incredible footballer but ultimately when he decided to use his hand to score at the World Cup he entered the pantheon of genius and this realisation that he’d broken through that glass ceiling led to the inspiration behind his second goal when he ran fifty yards round the England defence.

“There’s an apocryphal tale about Columbus challenging anyone to stand an egg on its end without it falling over and when they couldn’t do it, he smashed it on the table, so what when it brokes what was left of the shell could balance. That’s genius – doing the unexpected.”

“I’m not so interested in genius itself as what kind of society allows genius to flourish. Not many of us have the ability to be extraordinary, but to create a climate when that kind of thing can flourish, where someone with the capacity for genius doesn’t have to conform. That’s important.”

And the obvious question for a comedian. Who do you regard as a comic genius?

“I’m not sure. Someone like Buster Keaton was amazing but stand-up comedy is very difficult. I’m not sure if I’ve seen a comic genius. Maybe Monty Python which brought things forward and nothing was the same again afterwards. Some people would say Richard Prior was genius but yes, if there is such a thing as a genius it’s to do with reacting with an audience, which to be honest isn’t my great skill. I put quite a lot of detail into what I’m going to say. Michael McIntyre was arguably a genius, when he was doing comedy clubs with maybe 200 people, going completely off-piste and reacting naturally in real time.”

You recently talked about being lonely on tour and it’s something I’ve never thought of before but when band’s go out they have themselves, a singer will have his band, they both have a crew, but a comic is on their own.

“It’s not good for your mental health. You’ll have a tour manager maybe to get to to the venue but I think we should engage the equivalent of the grand tour companion, maybe distressed gentlefolk to be around and make cups of tea. But hotels, the attraction of being able to order your own meals and watch what you want on TV soon loses its attraction. That’s why I tend to do two or three nights in a row then come home.

“I’ll go into the foyer after the gig and meet the audience. Sometimes I might meet someone I’ve met on Twitter and see if they’re like you expect them to be. It is odd though, to never speak to anyone all day then expect to get on stage and talk for an hour and a half.”