Billions of pounds of Midlands investment opportunities to be unveiled at global property show.

More than seventy public and private sector partners, ten Local Enterprise Partnership areas, and the Department for International Trade will represent the region – the largest delegation Midlands UK has ever taken to the annual event. The region will present details of the multi-billion pound portfolio to the exhibition’s 24,000 attendees, which will include potential investors, property agents, developers and media from more than 100 countries. 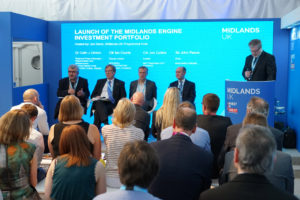 It is the second year that the Midlands region will work together to attract investment from around the world following a successful united presence at MIPIM 2017. Destinations attending MIPIM as part of the Midlands UK delegation include Birmingham, the Black Country, Coventry & Warwickshire, Derby & Derbyshire, Greater Lincolnshire, Leicester & Leicestershire, The Marches, Nottingham, Stoke-on-Trent & Staffordshire, UK Central Solihull, West Midlands Combined Authority, City of Wolverhampton and Worcestershire.

A 200m² dedicated Midlands UK pavilion will showcase the region’s investment portfolio, with separate sections for each destination partner, and an event space to host a programme of more than 50 events, including presentations, receptions and panel discussions.

Sir John Peace, Chairman of the Midlands Engine, said: “The Midlands UK delegation will show the world that the region is open for business. We are confident about the future and are ready to build on the Midlands commercial and trading history.

“Where else can you find one of the fastest growing regions in the world, sitting at the heart of one of the world’s largest economies, with a bed of skills and infrastructure in which to grow your business? By working together, Midlands UK will promote the region to investors and trade partners – delivering more growth, exports, jobs, and a better quality of life for those living in the region.”

Cllr Ian Ward, leader of Birmingham City Council, commmented: “As many people will have noticed from the number of cranes occupying the skyline, Birmingham is a city that is humming with the noise of regeneration. The city centre has been transformed through significant investment in infrastructure and commercial real estate and is now a destination of choice for international investment and blue-chip occupiers.

“The Midlands Pavilion is again set to be the centre of the conversation at MIPIM what with Birmingham recently being awarded the Commonwealth Games as well as exciting announcements planned for Peddimore, which represents one of the most significant industrial opportunities in the UK.”

Andy Street, Mayor for the West Midlands, added: “We are proud to be a partner in the Midlands at MIPIM and excited about the unrivalled opportunities this event offers to promote the West Midlands as the most liveable, investable and competitive place in the UK.

“The West Midlands is at the heart of the future of Britain. We are the largest regional economy with more business start-ups than anywhere else in the UK. We have unrivalled connectivity – with 90% of the UK’s market in reach within four hours. We are confident and we are winning. The West Midlands’ time is now, and as part of the wider Midlands delegation to MIPIM we will maximise our opportunity to showcase our region to the world.”

Rob Groves, Regional Director of Argent, said: “Paradise Birmingham is contributing to the growing momentum in the regional commercial property sector that is seeing more top-quality developments brought to market, creating jobs, opportunities and economic growth across the city and wider Midlands. Paradise showcases to the MIPIM audience some of the key economic drivers behind the region’s on-going ambitions.”

The Midlands UK area has a population of 10 million people – 15.4% of the UK – and an economy worth more than £200 billion economy. Last year, the Midlands UK region attracted 225 foreign direct investment projects, creating over 8,300 new jobs.