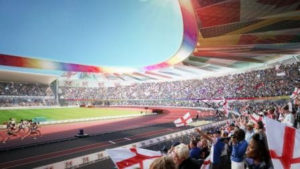 The government’s announcement that Birmingham, rather than Liverpool, is their chosen candidate to host the 2022 Commonwealth Games is a massive, if not decisive, step in the Games coming to our city.

Assuming that a formal UK bid is forthcoming (and it would be somewhat ridiculous to go through the domestic bidding procedure and then not submit a bid to the Commonwealth Games Federation), and with the only alternative candidate likely to be Kuala Lumpur in Malaysia, who have still to determine whether they even want to bid, Birmingham is now just two short steps from finally getting to host a major international sporting or cultural event after decades of failing to win nominations for such things.

So congratulations to Councillor Ian Ward, Steve Hollingworth (lead officer for sport at the Council) and their colleagues at the Birmingham Commonwealth Games Bid Company. And a mention that it was this website that, just two days after the close of the London Olympics in August 2012, that was first to call for Birmingham to try and stage the Commonwealth Games in either 2022 or 2026. And proof surely, as we have written before, that winning these government-approved contests is primarily about being in the right place at the right time.

For Liverpool – whose plans certainly lived up to their self-description as bold, innovative and transformative – made the crucial mistake of thinking that using the Games as leverage for a massive regeneration project, something that Manchester (hosts of the 2002 Games) and Liverpool itself (hosts of the 2008 European City of Culture) had done previously, would be pivotal in their gaining government backing. But that was then and this is now and the rules have changed. As Ian Ward repeatedly made clear, what the government were seeking was a low-cost, low-risk Games.

Birmingham’s cautious and (a word they used often) ‘compliant’ bid spoke to that, and it is telling that the Department for Digital, Culture, Media and Sport statement outlining why Birmingham’s name is the one that goes forward highlighted phrases such as “risk-minimisation” and “value for money”.

A Games for our times then, and a decision set against very real concerns that a further extended period of economic uncertainty for the UK lies ahead. A decision taken by a Government striving to reduce the annual budget deficit, yet confident that overseas competition for the right to host 2022 would be limited. An austerity Games perhaps; strong and stable, yet deliverable and placed in the hands of reliable and trustworthy organisers.

But there may be a further, and as yet unspoken, reason behind the decision; Ian Ward has stated that Whitehall had made it clear that it was the 2022 Games that UK cities must bid for or nothing. Because as Britain leaves the European Union, fractiously damaging relations with our closest neighbours in the process, it needs – and urgently, desperately so – to develop new trading links beyond Europe. So the 2026 Games would be too late, our hosting needs to be in five years time, as a probable transition period might be expected to end. And it needs to counter Britain’s growing image as an insular, nationalistic and increasingly irrelevant island.

So as the government considers dramatic measures to restrict access to the UK for a large number of EU citizens, and with many of those already resident here feeling increasingly uncomfortable, it is to Commonwealth nations such as India, Bangladesh, Australia and Malaysia that Britain now looks to fill an anticipated skills shortage and to improve tarnished perceptions of itself: bring us your clever, your smart and intelligent, your innovators, your future wealth creators, and those with rich parents who can afford our astronomical education fees.

So where Liverpool promised an armada of ships sailing along the River Mersey, Birmingham offered trade fairs; where Liverpool promised use of a new 50,000 capacity waterfront stadium, a stunning new 50 metre swimming pool and massive urban regeneration north of the city centre, Birmingham’s stated wow factor was it’s young and diverse population, including over 314,00 West Midlands residents born in a Commonwealth country, and tens of thousands more with Commonwealth heritage. It played to those strengths and pushed them relentlessly.

Yet despite the understandably positive response by many in Birmingham to Thursday’s news, a degree of perspective might not go amiss. If Birmingham is eventually selected to host the 2022 Commonwealth Games it will not transform the city or its fortunes in the way that hosting in 2002 did – and continues to do – for Manchester.

Birmingham’s sporting infrastructure will change little; replacement of the ageing main stands and related facilities at the Alexander Stadium coupled with the installation of improved training facilities, and the provision of a new 50 metre aquatics centre in Smethwick, the latter to be set against the probable closure and/or demolition of the existing 1930s Grade II listed pool in Thimblemill Road.

In terms of wider infrastructure, we could expect a major upgrade of Perry Barr railway station, a metro or sprint tram service along Birchfield Road (a scheme of dubious benefit over current to and from city transport provision) and an additional, large-scale residential development opposite the One Stop Shopping Centre. Whether funding for these programmes will come principally from the diversion of existing devolved budgets delivered by Local Enterprise Partnerships or from additional government monies is unclear, but indications are that it will be the former.

Undoubtedly there will be some permanent new employment opportunities (along with considerably more temporary ones), and the chance for local businesses to compete for millions of pounds worth of Games-related contracts, whilst Birmingham’s national and international profile and image may undergo a degree of positive change.

Fine as far as it goes, but should the city eventually be awarded the Games, it must use them as the starting point for long-term transformation, rather than the culmination of it. And that will require considerably greater ambition than we have witnessed thus far.