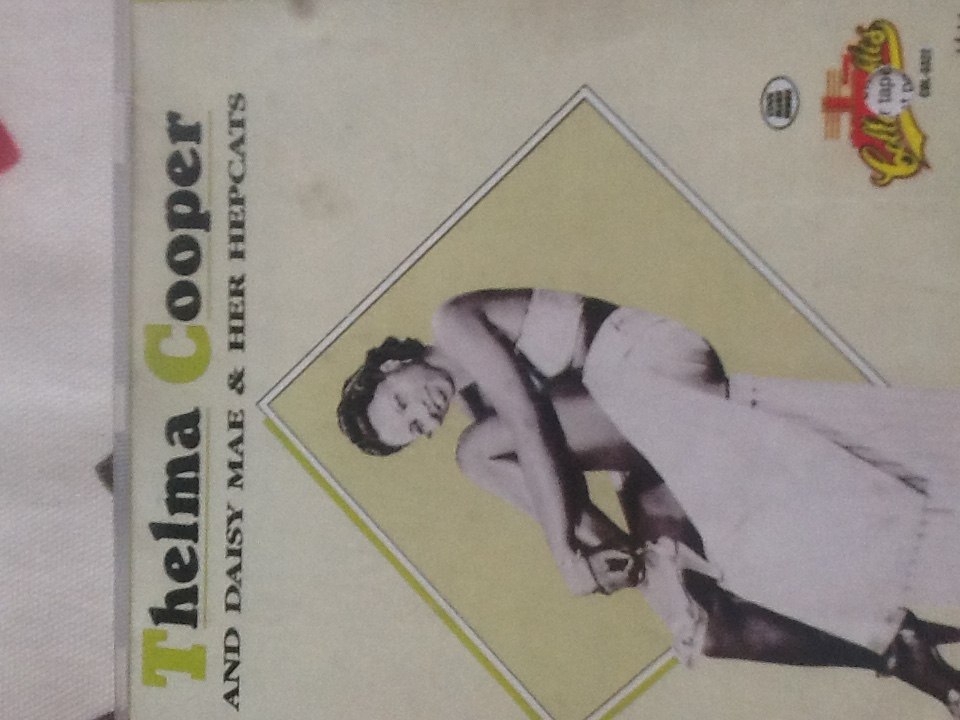 My first CD sat on my messy music shelf for 26 years until now. It is Thelma Cooper, a scat and jump jazz singer steeped in mystery.

She surfaced in the late forties, cut six tracks, and then disappeared. Even her name is a mystery- she could have been Dolly Cooper, Baby Doll or early R&B singer Little Clydie. Some music geeks think she was also Daisy Mae, who used a foot pedal to beat a vertical drum as she sung her heart out.

The slinky photo I’ve seen (and the question remains – is it really Thelma?) is of a gamine woman (see above) beguilingly smiling to the camera and her fans. All that is known is Ms Cooper recorded her earthy music in Philadelphia with a group called Doc Bagley’s Orchestra and then…who knows? She was gone. She went walkies, by the way, about the same time as Daisy Mae and Her Hepcats, with whom she shared a compilation by Gotham.

Thelma had a lusty catalogue: I Need a Man for Christmas, Ooh Daddy and the vampy Talk to Me Daddy. But now the tracks skip. Too much butter or Diet Coke splattered across the grooves. Goodbye Thelma, see you in another dimension whoever you are, wherever you are, whoever you really were. 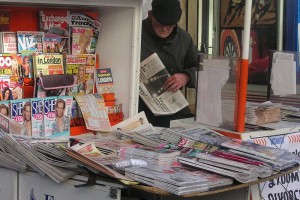 Soon after losing Thelma to the Land of Skipping Tracks, I arrive at a bijoux hotel in Birmingham to sift through a mountain of journalists’ submissions for an annual awards ceremony.

It includes a wide range of categories, from story of the year to sport reporter of the year. The applicants come from mega bigboys such as the BBC, city radio stations and tiny papers covering small towns on the fringes of the Birmingham megopolis.

For this year’s prizes, plenty of young broadcast and print hopefuls offering vital stories so important to their towns and cities in the Midlands. Stories that lift the cover of corporate and public sector secrets that many want to conceal rather than reveal. I deemed these stories, these reporters, the winners. And sadly, I felt I had to swim through too many crime stories, too many tales off the police files that illuminated little and simply threw a lurid light on a sad tacky underworld.

I can’t, of course, declare the winners now. But let’s just say there is enough difficult and vital reporting going on to keep the flickering light of journalism alive as cutbacks and a tabloid culture hinder the difficult job of holding powers to account.

Of course, one crucial issue that today’s media testily grapples with is this Brexit debacle. It’s political car crash news. Day by day, a new issue rears up, is chewed up, and then disappears, unresolved, for the next to appear.

But one that won’t go away silently, of course, is the Irish border question. And I’ll tell you just why in a minute how it is a part of my life.

To re-cap, the Republic is part of the EU. When Brexit Britain parts company with the EU, Northern Ireland will be split asunder from the South. One side European, the other British and outside the EU. Right now there is an open border. And after the split ….what? That’s the issue. Will there be a ‘hard’ border?

I live part of the year in southwest Scotland. If the border between the two Irelands remains open, border controls will take place in the nearby Scottish port of Cairnryan, with its Belfast links. There would be, in effect, an immigration checkpoint at an internal seaport between Northern Ireland and the mainland.

I ran into my MP – an avuncular, newly-elected Conservative who benefited from the anti-Nationalist backlash in the last election.

“So,” I asked, “what’s your take on this internal immigration check at a domestic port sitting on the edge of your constituency?”

Nor does anyone else. It’s a mess.

4 thoughts on “Blues for a forgotten crooner”