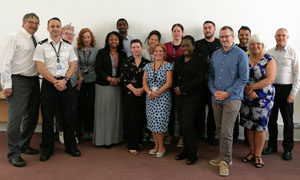 Staff and partners at the Rough Sleeper Task Force Launch.

The task force will tackle the increasing numbers of people genuinely sleeping rough in the city and the increasing numbers of people begging and involved in criminal behaviour through a three-pronged set of guiding principles – Educate, Engage and Enforce. The task force will coordinate individual strategies on a case by case basis, building on the work of a triage team piloted last year.

The principles underlying this taskforce are to –

Engage – encourage people to accept support for their health, substance misuse and housing in order to come off the streets

Birmingham City Council’s ambassador for rough sleeping, Cllr Sharon Thompson, said: “Birmingham is experiencing an increase in rough sleeping, begging and anti-social behaviour. We are also facing an unprecedented increase in drug use, particularly New Psychoactive Substances such as Mamba and Spice. It is clear that no single agency can deal with the wide range of issues and needs that people have.

“The Rough Sleepers Task Force brings together the expertise that we need in a coordinated way, ensuring that we share information, quickly and efficiently, and work together to pull together programmes of support for people who need it.”

Superintendent Andy Parsons added: “On a daily basis my officers are speaking to the homeless community, giving them advice and directing them to support agencies who can help them off the street, access benefits and address issues like substance abuse.

“I’m confident this coordinated taskforce approach will help protect people who sleep rough in the city centre and get them the support they need.

“One of the key messages we’re reinforcing to rough sleepers is the dangers presented by synthetic drugs like Spice and Mamba. Our officers are finding some people still consider them as a low-risk drug substitute and are taking it without any consideration for their safety – but as we’ve seen recently, these are dangerous and can have fatal side effects.”