Steve Beauchampé continues his critique of the Birmingham and Liverpool Games bids. 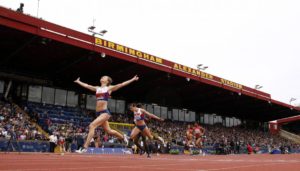 A key factor in ultimately determining the contest to select a host city will be the location and standard of facilities at both the athletes’ village and media centre. Although yet to be officially confirmed it appears that Birmingham’s athletes’ village will be located on the former Birmingham City University North campus in Perry Barr (opposite the original Alexander Stadium, dating from 1929).

While this is a reasonably accessible location for many athletes and officials considering the known and likely placement of certain key venues, compared to Liverpool’s proposed location of the athletes’ village alongside the main stadium in Nelson Dock and within walking distance of both the city centre and myriad waterfront attractions, it perhaps falls someway short. We remain to be convinced that the retail and culinary attractions of the Perry Barr One Stop can be favourably compared to those of the massive Liverpool One retail complex and the rest of the city centre.

The athletes’ village will provide permanent homes for up to 5,000 people following the Games, so the upgraded public realm and public transport system that will be necessary to make Birmingham’s suggested location viable for 2022 (at a minimum a rebuilt Perry Barr railway station and the removal of arguably Birmingham’s most intimidating and noxious underpass) will be a necessity rather than an aspiration.

One of Birmingham’s strongest cards is its record in hosting world class international sporting tournaments and competitions, including numerous World and European finals across a range of sports. A plethora of return bookings from sports governing bodies is testament to the city’s ability to handle such events, as is the enthusiasm displayed by many of the sports fans that attend them. In addition Birmingham has successfully staged numerous major non-sporting events, from the Eurovision Song Contest, a G8 Summit, major political party conferences and large-scale exhibitions, concerts and other public gatherings at venues such as NEC, ICC and NIA.

That track record could be vital, because Liverpool also understands how to put on a big event. Although Birmingham is undoubtedly ahead in terms of sport, Liverpool is home to the Grand National, regular Premier League and European football and with several senior rugby league teams and three Open Championship-standard links golf courses located nearby.

The Mersey River Festival and Tall Ships events attract substantial crowds and the city’s tenure as European City of Culture in 2008 (it beat Birmingham to the title) was not only considered a significant success but led to the establishment of the Liverpool Biennial and development of a cultural and artistic scene that outshines many UK cities.

Birmingham’s bid puts great store in the region’s cultural diversity, not least in the number of citizens with non-English Commonwealth heritage resident here. The city has successfully absorbed peoples of many ethnicities, leading to the creation of many often vibrant and distinct communities, and has done so on a scale that is arguably greater than in Liverpool. Both cities can lay claim to having youthful populations, and the manner in which each proposes to involve their different communities and young citizens in the Games could be a key determinant in selecting England’s candidacy.

A myth that appears to have developed within sections of the West Midlands media is that should an English city be awarded the 2022 Games then substantial amounts of central government finance will follow to that region. The DCMS’s low cost, low risk mantra gives a lie to that argument, with the majority of any infrastructure spending the result of already devolved monies (such as for transport schemes or housing) being prioritised by regional Local Enterprise Partnerships or Metro Mayors towards projects necessary for the Games.

Some additional government funding to the successful city may be forthcoming, perhaps through the auspices of Sport England, to assist with projects such as the Alexander Stadium upgrade, the temporary conversion of Bramley-Moore to and from an athletics venue or towards the cost of either Birmingham or Liverpool’s aquatic proposals. But whilst such investment would be welcomed by either city, of itself it is unlikely to be transformational.

Both Birmingham and Liverpool should be capable of staging a high calibre Commonwealth Games in 2022, even though original hosts Durban’s withdrawal has reduced the lead-in time from around seven years to just five and despite the main stadium and aquatic centre plans of both cities still being at an embryonic stage. However, it might be remembered that recent construction projects such as the redevelopment of New Street Station, the metro line 1 extension and the 50m pool at the University of Birmingham were all completed late (and we imagine that examples of overrunning schemes might also be found in Liverpool).

So although Birmingham’s bid team say that 95% of it’s proposed venues are complete, and although their counterparts in Liverpool insist that Bramley-Moore will soon secure funding and planning permission, the fact that construction work on possibly the two most crucial venues in both cities is still some distance off should not lightly be dismissed.

Yet which city (if either) is finally selected as England’s candidate might be determined by factors beyond the quality and financial plausibility of the bids themselves. Good political connections, maybe just being the right city at the right time, all could be pivotal in deciding who is selected. Hopefully though, it’ll be us.

See part one of this feature here.