Villa are reportedly in the hunt to sign John Terry. Dave Woodhall ponders the issue.

It’s been seven weeks since Villa’s 2016-17 season finally fizzled out and since then there’s been hardly a sniff of transfer gossip. In earlier times that would have been cause for complaint in itself, but there’s still a fair amount of goodwill towards Tony Xia so all’s relatively quiet in the oft-melodramatic world of the internet. Except for one man, one name…

As I said to Jeremy Corbyn only the other day, I hate name droppers, but I’ve interviewed Ron Atkinson a couple of times. It’s not the most difficult of jobs, in fact the hardest thing about it is remembering to press the ‘record’ button. You then ask Ron a question and sit back as he lets forth a lengthy monologue of opinion and anecdote, some of which might be relevant to the question he’s been asked.

Ron’s public image and his regular attempts to re-write the English language often hide what has always been a deep and extensive knowledge of the game. That’s hardly surprising given the length of time he’s been around and the success he’s had, and one of the secrets to his success is the way he can make players tick. There can’t be many of his charges who didn’t perform and one of the things I asked him was how you motivate a player who’s done everything, won it all and has nothing left to achieve. He pointed me in the direction of Bryan Robson, and how even at the end of his playing career he was still giving 100%.

Ron went on to say that it’s often easier to manage players at the top than further down, because the lesser players can be happy at whatever level they’ve got to. They think they’ve made it, fame and fortune is theirs already and so they’re only interested in doing the basic minimum to keep themselves where they are. The players at the top, on the other hand, have got there not just because of their talent but because they also possess a burning inner desire to keep going, to carry on winning and improving. That’s what separates the winners from the rest.

Which of course leads me to the man responsible for what few headlines Villa have generated this past week – John Terry, who has, if you believe the stories, been offered a contract to sign for us. With the possible exception of Fabian Delph, there isn’t a signing that would be more controversial.

There are arguments for and against Terry joing the Villa, and most of them are a matter of opinion. What’s undeniable, though, is that he’s a pretty loathsome and egotistical character, with a list of accusations, if not actual convictions, stretching back almost to the time when he first broke into the Chelsea side. Whether all that could be put to one side should he ever wear claret and blue is where the fun, and the arguments, begin. 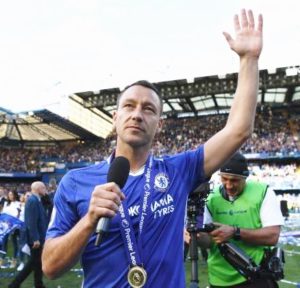 The other thing that can’t be denied is that Terry was once a top-quality player and he might be able to perform at a sufficiently high level even while approaching 37 years old. After that, the argument becomes less clear-cut.

Some will say that Terry’s heart will remain forever at Stamford Bridge, and he’ll never give that level of commitment anywhere else, that all he’s interested in is a last payday to top up what must be one of the largest pension pots in the country. I’d argue against that for the reason I mentioned above – he’s always striven for success and there’s no indication he will change that mindset now.

As for the money, if this was his sole motivation he’d head for China or MLS, or possibly one of those big Premier League clubs such as Burnley and Bournemouth that the Villa can’t hope to compete with. Terry isn’t a Joleon Lescott or Micah Richards; I don’t doubt that if he joined the Villa he’d give his all in every game he plays. The question is how much of his all he now has left to give.

The other argument I’ve heard is that he’d split the dressing room, presumably based on his less than politically correct personality. Again, I don’t see this as much of a problem. Footballers aren’t the most deep-thinking of creatures. Their prime interest seems to be the acquisition of shiny things, whether that be cars, jewellery or winners’ medals. If Terry can help with their collections, the Villa players will be satisfied.

His character may even be a force for good in what has traditionally been one of the most under-achieving dressing rooms in football. It’s been long said that playing for the Villa is an attractive career option provided the team never looks in danger of getting relegated, with the eventual result that they did, indeed, do just that. It’s possible that a proven leader – and after captaining Chelsea to numerous honours that’s another thing that can’t be denied about Terry – might be able to turn round the complacent mindset that has defeated a string of managers and coaching staff for so long.

But, and there has to be a but. Terry’s will to win, his personality, his mindset, will be worth nothing if he’s not up to the job of playing regularly anymore, and more importantly if the Villa don’t get off to a good start. If he joins he’ll be welcomed by most but don’t lets kid ourselves that he won’t be the first target should the team not do well immediately.

After all that, I’m sitting firmly on the fence over the question of whether we should offer a reported £60,000 a week of our presumably limited transfer funds to John Terry. If I read that he’s signed I’ll wish him all the best, with the added bonus of realising that the biggest club in the Championship have been able to attract the biggest name. And I won’t deny that if he goes somewhere else I’ll breathe a sigh of relief.