It was fifty years ago today, trumpets Richard Lutz, as he re-lives that great album. 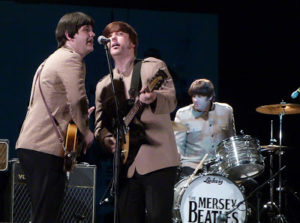 Yes, it is hard to avoid the news that Sergeant Pepper’s Lonely Hearts Club Band is five decades old. It was launched in Britain in April and in the States in June of 1967

But on Sunday night, I was dragged to the Hare and Hounds in King’s Heath for a tribute band re-doing (note for note, mistakes and all) the original album.

Dragged, I say, because it sounds, well, a bit naff and overcooked. As the boys would have said: Let It Be.

But, really, what a hoot it was.

When you entered the small upstairs room in this South Birmingham pub, crammed with sixty-somethings, and heard those songs and those Liverpool voices from The Mersey Beatles dressed in their Edwardian regalia, I have to say…. they nail it.

And what they nail, even unintentionally, is a surge of memories Yes, they wink and nudge to remind you it is all a fake, half the Beatles have died and the music does creak around the edges. But with the opening notes from the rousing Sgt Pepper’s Lonely Hearts Club Band anthem to the sweet Lovely Rita with its nod to psychedelia, the group (highly proficient, by the way) do re-create those sunny days back in ’67.

Notably, the quartet does have an integral fifth member who works his synth off by re-creating a brass section, a Melintron keyboard and a wealth of guitars and background. But this is a well-oiled group complete with Scouse chippy asides. It may be a tribute band but it works wonders for  all that.

And, as a poignant afterthought, this show was staged only steps away from the belated much-loved Ritz Ballroom on York Road where the group did actually perform in 1963. Twice.

The packed room, full of balding heads, white goatees, ladies in comfy shoes, was consumed by the warmth of memory.

Where were we then? And, for that matter as we were washed over with Lucy in the Sky, where are we now?