The High Kings have been around since 2008. They’ve released best-selling albums and toured the world, playing to audiences both large and prestigious – such as Barack Obama when he was US President. Ahead of a UK tour that includes a date at the Irish Centre in Digbeth, we spoke to frontman Finbarr Clancy.

You’re coming over at a time when an entire section of the community and its culture is being demonised because of the actions of a tiny number of psychopaths in their midst… We’ve been here before haven’t we?

Growing up in the seventies was hard for young Irish people, and sadly we saw that in Birmingham, but the situation has changed and now it seems there’s nothing cooler than to be Irish. How did that happen?

“I think the world started to learn about Irish culture, it started being spread in a way by the Clancy brothers and my father, those sort of people but Riverdbnce was what really started the appreciation of Irish cuture on the world stage. I remember watching it, about 1994 during the interval of Eurovision and the applause was so loud and so continuous that there was a palpable feeling of the tectonic plates shifting. The next day I knew that something significant had happened here and a line had been crossed in a good way that was never going to fade quickly.

Earlier bands like Thin Lizzy and U2 must have helped as well.

“They did, and even things like Irish pubs. In New York for example, if you’re having a night out and you want a meal you go to an Italian restaurant then if you want a drink after that you go to an Irish pub for a point of Guinness or whatever and talk to people, listen to the music. It’s the way the whole thing was presented.”

That Alan Partridge episode brought it home to me. You watched it and your skin was crawling with embarassment, yet ten years earlier it would have said for real. I don’t think you can tell when that sort of behaviour ended.

“God, yes. Dere’s more to Oirland dan dis. And that all changed. We are incredibly close. People don’t realise it, the cultures may be different but we share enough of that culture. You’re our closest neighbours, multi-generational movement has been going on, the gene pool has been so mixed.”

Talking of genes, you were brought up in a musical family (Finbar’s father Bobby was part of folk band the Clancy brothers). Did you always know you were going to be a musician?

“I always enjoyed music and from an early age if I was asked what I wnated to do I never said I wanted to be a musician, I fell into it. My father would go upstairs and practice the banjo every night, wI was seven or eight I asked what he was doing. My mother sent me up to him, he called me in and he started to show me how to play. He bought me a banjo and I just went from there.

“Of course, I went through the teenage angst stage where I wanted to be in a rock band, so I was writing songs and playing gigs but then when I was about 25 my dad had a quadruple bypass and I was asked to go on a tour with my uncles in his place, for five dates in America. I had to learn the songs quickly and I had a ball, I loved it so much and I continued with the band for about three years. It may be that I took it for granted but the folk tradition is fantastic once you get into it.” 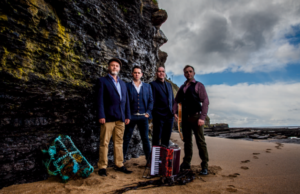 Did you really think you’d end up with platinum discs and playing to the President of the United States?

“Never in a million years. At one stage I thought I was going to be in a rock band as big as U2 but I suppose the folk thing was always on the cards with the Clancys and it turned out to be fantastic.”

Doing a gig for Barack Obama must have been a particular highlight. Although, could you really call performing at the White House a gig?

“It’s certainly a nice gig to get. We played Trafalgar Square the day before we flew over, there were thousands upon thousands there for a St Patrick’s festival then we went to Heathrow and flew to Washington to play for Obama. After we’d played we were in the White House, not exactly being given free rein but we were pottering around the Lincoln Library and it was amazing, all the pictures of the presidents, it was just incredible. There was just so much security, about five different layers. We’ve played for the Irish president as well, which was also a big honour.

“The longer you go on you find yourself in situations you would never find yourself in if you weren’t playing music. Again, never in a million years would I have met the president otherwise. I have so many good memories and hopefully there are lots more to come.”

Including the Irish Centre in Birmingham.

“We look forward to that and to coming over to England. We should come over more than we do, but we hope to play there more often. Isn’t it reckoned that something like one in six people in England have an Irish ancestor?”

Do your audiences want the traditional songs, or are they receptive to new material?

“The thing is to give them what they know and then do it in a new way. There’s a reason why songs stick around. but if everyone did exactly the same versions the audience would get very bored very quickly so put a bit of yourself into everythig. Ther arrangements are fresher, much newer than some versions. We give the songs a bit of a kick up the arse every now and again. We’ve released an album of new material and the audiences enjoy that. You give the audience what they want, you don’t want there to be a blank spot so something they haven’t heard before, it’s great but you don’t want there to be too much.”

That coud be your strapline. ‘Come along and see the High Kings kick music up the arse’.

“Get kicked up the arse by the High Kings. Maybe we could have a picture of Bishop Brennan there.”

See, I’m sorry. I tried. I really tried but there was no way I could avoid a Father Ted reference.