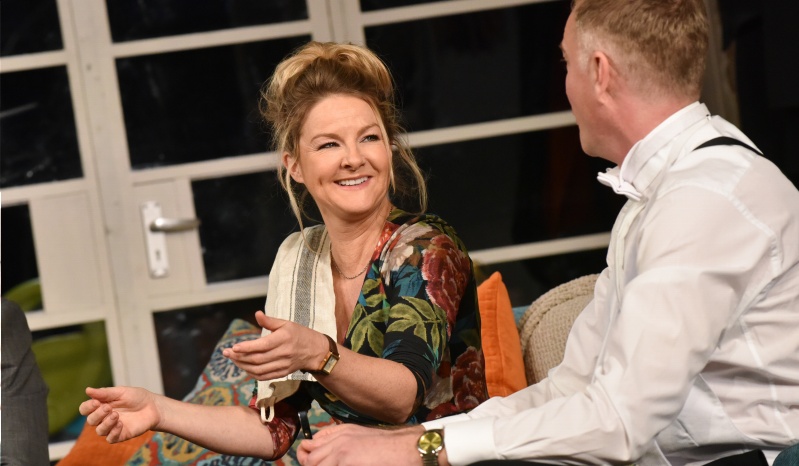 Richard Lutz sits down to a quip-heavy dinner party at the Birmingham Rep.

There’s nothing like showing up to a friend’s with a bottle under your arm ready for a night of chitchat, gossip and a sting in the tail. In other words, a dinner party complete with dubious food, strong booze and, sometimes, a secret or two to add spice to the evening.

What’s In a Name? uses this trope to deliver snappy lines, a twist or two (initially getting laughs from an uncomfortably odd name for an expectant baby) and then a wave of sharp tongued dialogue. Director Jeremy Sams adapted a well known French verbal farce to suit a British audience. And you get the full Monty here: class, prejudice, bad assumptions, ill-thought through logic, more misassumptions and the great British game of bad language and booze. Plus a prat fall or two. And slapstick.

The story itself is sparse – five pals gather in a re-done south London warehouse flat kitted out with new money. And slowly, the night unwinds as everyone reveals – or is forced to reveal – parts of their lives they’d rather conceal.

Sams correctly chucked out the interval to allow the fast script to gather steam. Sarah Hadland (the little ‘un in TV’s Miranda) handily plays the zippy quippy hostess happy to show off her tangine and her verbal counterpunching. Nigel Harmon (Eastenders, Downton Abbey) is her loudmouth snarky rich-as-can-be brother, an expectant father who wants to call his son by the godawful name of… Well, that would be telling, wouldn’t it? 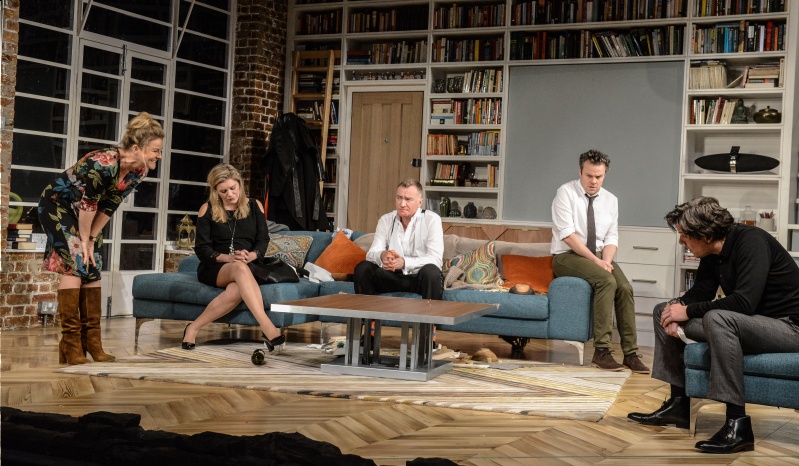 Hats off to designer Francis O’Connor for framing the trendy flat in an oblique metal frame to give us a lopsided view of the play, the quick script and the interaction of the main five characters. The world becomes unstuck for the riotous quintet, and with the help of angles and a good use of the huge Rep stage. It adds to the jumpy feel of the play.

So, a good start for The Rep for 2017. There’s this conventional but well written sidesplitter in the main theatre. And just next door, is the raw, tough uncompromising drama Love. The two plays, in effect, reflect two sides of the British coin here. One about the moneyed classes. The other about the powerless lower depths. Both extremely well done. Both worth shelling out for a ticket.