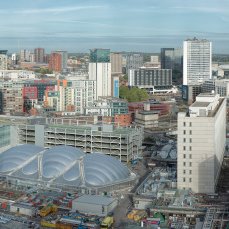 Commissioned to mark two months until the John Lewis Birmingham regional flagship shop opens on 24th September, the super-high resolution panoramic has affectionately been termed as a “Brumscape” and was taken from the Staying Cool apartments at the top of Birmingham’s Rotunda tower.

The gigapixel format, also known as deep zoom, allows viewers to pan across the skyline and zoom in on Birmingham’s city centre, discovering the smallest details of the city, as well as up to 15 miles in the distance.

The photograph is an 80 megapixel image made up of four rows of 33 separately-taken shots, meticulously stitched together to create a unique photograph stretching across Birmingham’s evolving cityscape. Iconic landmarks including Edgbaston Cricket Ground, the new Library of Birmingham, the BT Tower and the new John Lewis shop at Grand Central can be seen, as well as a hot air balloon some fifteen miles away.

Lisa Williams, Head of Branch, John Lewis Birmingham, “Birmingham is a city undergoing a huge transformation and this striking image truly captures this. The support we’ve had from the local community since we announced the new shop has been fantastic and we thought this was the perfect way to mark the two month countdown to opening with something special we hope people will enjoy.”

The photographer, panoramic specialist Will Pearson, was one of the earliest adopters of the deep zoom format and is considered a pioneer in the field. Speaking about the gigapixel shot, Will said: “It was obvious when bringing this image to life that Birmingham is a constantly evolving city – from the chimney stacks across the skyline echoing its industrial past, to a city centre of new, innovative schemes.”

John Lewis Birmingham is the business’ first full line department store to open in four years and will be one of the biggest John Lewis shops outside London. The 250,000 sq ft department store will be the anchor tenant of the new Grand Central retail development, which sits above the redeveloped New Street Station.

The shop represents a £35 million investment by the business in the city and will be John Lewis’s most innovative shop to date. It will showcase the best of the department store’s offer, allowing customers to shop from more than 350,000 products from the retailer’s full range, including those leading the latest fashion, furniture, homewares, beauty and technology trends.

The full image can be viewed here: www.johnlewis.com/our-shops/birmingham/birmingham-panoramic