After being called in at little over 24 hours notice for his full CBSO debut last week, Birmingham-born conductor Alpesh Chauhan talks with Steve Beauchampé. 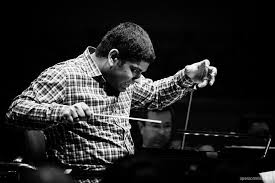 When and how did you receive the news?

“I was called by CBSO Chief Executive Stephen Maddock about 4 pm on Wednesday. He told me that Andris Nelsons (CBSO Music Director) had an ear infection and had been advised by doctors not to fly, and could I step in?

“The scores were dropped off at my house during the evening. Fortunately, we’d just returned from a three-week European tour, where I’d been assisting Andris, and the orchestra were performing Dvorák’s Seventh Symphony, whilst both the Schubert Unfinished 8th Symphony and the Strauss Horn Concerto No. 2 they’d played earlier this year.

“Schubert is a well-known piece but the Strauss is really tough and I knew that this was the piece I’d need to spend most time on. Actually, when I got Stephen’s call I was making a five hour lamb curry and I decided to finish and enjoy it, relax and look at the Strauss, happy to rely on my knowledge of the other two pieces. So it was the following morning when I sat down and did a lot of work on the Strauss, spending some strict time on it.”

When did you begin working with the orchestra?

“We already had a three-hour rehearsal booked for the afternoon at Symphony Hall but I’m always cautious about making the orchestra play too much on the day of a performance and we finished early. We just warmed things up and concentrated on certain bits but the orchestra appreciated the situation and were on top form. We went through the Strauss in detail, particularly the horn section, which is really difficult, played the Schubert in full and focused on certain parts of the Dvorák.”

It’s not the first time that you’ve been asked to conduct an orchestra at short notice, so those experiences must have stood you in good stead?

“I think it’s the fifth or sixth jump in that I’ve done and whilst I think that they’ve all been successful, this is the programme I’ve been most comfortable with. The Dvorák in particular, it’s both dark and happy, an absolute masterpiece. I adore it.”

What sort of feedback have you had, from both the players and the audience?

“The orchestra have been so supportive and the feedback from the audience, both at Symphony Hall and the following night when we did the same programme in Oxford, was fantastic. I felt like a charlatan though because I was stealing an Andris audience, but it had been over three weeks since the orchestra had performed in Birmingham, which is a long time, so this was our homecoming concert.”
.
There seemed to be genuine warmth from the Birmingham audience towards you.

“To me it’s family, it’s the orchestra that I’ve grown up with, it’s what I know a symphony orchestra to be. They’re one of the world’s best and 90% of what I know about working with orchestras comes from my time with the CBSO. I’ve been here for two years but to actually do a concert, everybody got really behind me.”

Is the fact that you’re local an element?

“I think that for the orchestra every conductor is a conductor and it doesn’t matter, but for the audience yes; there was an energy in the hall and people seemed really excited and I’ll cherish these two concerts forever.”

Was it the performance you hoped for?

“The orchestra here are so responsive, it’s amazing, the moment you want to change something or do something different to what they’ve done before, put your fingers in the electric socket, the whole orchestra ups a gear. In fact it’s sad when you see people who don’t know that they have these extra gears, at both ends of the spectrum, be it playing very quietly or reaching massive dynamics.

“They know how to play Symphony Hall so well, and having spent two years with them I know what they’re capable of and they can really make some special sounds. When I wanted them to produce those special sounds, when I asked for them, they really happened, sometimes more so than I ever thought that they would.”

The set up and acoustics at the Sheldonian in Oxford on the second night were different. Did you have to re-balance things a little?

“We had an hour to rehearse, which we used to touch things up from the previous night, things I thought we could improve. It was a lovely atmosphere, we played in the round and we were on the flat, which made it quite intimate and particularly suited the Schubert. The orchestra has played the venue before and it’s a lovely hall, but you do get a bit of extraneous noise, which can make rehearsals in particular a bit difficult.”

Who inspires you as a conductor?

“Andris of course, he’s taught me so much, how to work with an orchestra, how to inspire an orchestra, how to just be nice, to get results through being kind and generous. He doesn’t conduct or direct, he just lives the piece, he embodies how he feels the music should go. You can tell the influence on him from his mentor, Mariss Jansons, who’s also fantastic.

“Simon Rattle of course, whom I’ve had the pleasure of seeing work with the CBSO three times now. Walter Weller, who was leader of the Vienna Philharmonic at aged seventeen, he knows just how to get the sound that he wants with minimal effort, and of course Mike Seal and Ed Gardner here at the CBSO have always supported and encouraged me.”

You became Assistant Conductor at the CBSO last summer. How has your conducting evolved since then?

“I think, or hope, that I’ve developed hugely, although you can’t always put your finger on how, but you sit these watching all of these great conductors and you absorb. We must watch and pick things up, not just to see how things can get better, but learn what not to do. It’s been absolutely invaluable seeing so many conductors with the same orchestra and see how the CBSO plays differently under different conductors, sometimes wildly differently, polar opposites.” 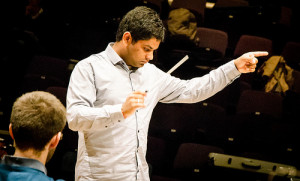 How would you describe your style and technique?

“At the Royal Northern College of Music I learned about technique, but Andris has shown me how to inspire certain sounds and depths of sound. I’m picking up so much technique all of the time. For instance, you must let the music breathe and allow it to happen, you can mould or guide it in a particular direction, to show or allow a different dynamic to happen, but you must let it breathe.”

You’re back at Symphony Hall on June 25th with the CBSO. What’s the programme?

“It’s a lovely programme (Shostakovich, Strauss, Reich, John Cage and Mussorgsky’s Pictures at an Exhibition) which was put together before I was asked to conduct, but it follows on from Andris’ final Birmingham shows and it’s a chance to show the orchestra off in a different light, to hear the wind section, especially with Veronika Klirova, our relatively new second flute and Oliver Janes, our incredible new first clarinettist. To hear the brass and wind instruments highlighted should be a great experience.

“We finish with an excellent arrangement of Pictures, which gives the brass section a chance to really get stuck into it, plus I’ve never conducted it in concert before.”

What else is in your diary?

“I’m not scheduled to perform in Birmingham with the CBSO until March 2016, a concert that includes Borodin, Shostakovich’s 15th and the UK premiere of Azul, by the Argentinean composer Osvaldo Golijov, who is a friend of my old cello teacher and CBSO cellist, Eduardo Vassallo. I’m really looking forward to that.”

Before then, Alpesh Chauhan will continue his work as CBSO Assistant Conductor, whilst taking the baton at Manchester Camerata, the BBC Philharmonic, Kymi Sinfonietta in Finland and Filarmonica Arturo Toscanini in Parma (all return visits). First time engagements come with Teatro Carlo Felice in Genoa and Maggie Musicale (Florence) along with the orchestra of Opéra National Lorraine in Nancy. Clearly a busy young man.