Students aim to raise funds for the homeless with ‘refreshed’ fashion goods. 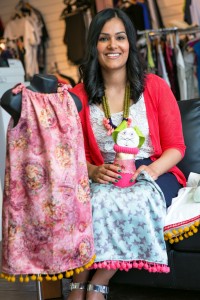 Fashion students from Coventry University are setting up a pop up clothes shop with a difference in aid of a charity for homeless and vulnerably housed people.

The students have joined forces with Coventry Cyrenians to help raise funds through the sale of a new line of clothing and accessories repurposed from fake and donated fashion goods.

Over the next few weeks, the students’ designs will be on sale at the Cyrenians’ Windsor’s & Refreshed concept store on Far Gosford Street in Coventry. All profits will be split between the charity and the students themselves who, as well as putting their skills to good use for a worthwhile cause, are taking advantage of the opportunity to gain valuable real world retail and merchandising experience.

The pop up store, which each week will see a different line of clothing from the second year students involved, forms part a collaborative social enterprise project between Coventry University, Coventry Cyrenians and Coventry Trading Standards called Counterfeit to Counter.

The Counterfeit to Counter project was established in 2010 to raise awareness of the Cyrenians’ work whilst providing an opportunity for students from the university to promote themselves and their talents. The project came about following an approach to the university’s fashion department by the Cyrenians, which was looking for help in repurposing counterfeit clothes that had been donated to them.

Initially, the plan was for students to practice their skills on these garments or to simply ‘de-brand’ the goods before returning them to the charity. But the university’s fashion team hit upon the idea of developing things further and allowing their students to get creative by deconstructing the fake goods and re-modelling them into fresh, new original garments which the Cyrenians could then sell on.

The university now runs a specialist module as part of the Counterfeit to Counter project in which students creatively up-cycle counterfeit garments, which are then marketed under the label Refreshed. Students are also taught about the wider implications of fake goods and their negative impact on the fashion industry and society as a whole.

A further module has been developed based on the more recent sister project, Counterfeit to Classroom, encouraging students to transfer their skills to clients of the charity through an organised and assessed module.

Amandeep Asahan, a second year fashion student at the university, is one of the recent recruits to the Counterfeit to Counter project and she has produced a range of children’s outfits, cuddly toys and womenswear designs for the latest line of clothing for the Refreshed label.

Amandeep said: “Being involved in the counterfeit clothing project has been a great experience. It’s challenged me creatively and got me thinking about things like sustainability and recycling. Plus, on a personal level it’s been very rewarding as I’m contributing to a good cause. It’s really nice to be involved in something that is helping others.

“I’ve learned about the business side of fashion as well as I’ve had to think about things like pricing and promotion. I’m about to embark on a work placement with George Clothing at ASDA so I’m sure this experience will stand me in good stead for that.”

Phil Bragg from Coventry Cyrenians added, “We’re delighted to be working with Coventry University on this initiative. Their expertise in fashion design is of course invaluable but they’ve also really bought into what we’re trying to achieve here in terms of raising awareness of the plight of homeless and vulnerable people in the city.

“It’s great that their students are getting involved in a sustainable, community focussed project like this and I’m always impressed by the creative flair and talent on show. I do hope people will come down to our shop over the next few weeks to have a look at what’s on offer. It’s a brilliant opportunity to pick up a unique piece of designer clothing at a great price – and of course to support the work of our charity.”