It is not yet winter. But autumn has passed, says Richard Lutz

Frost just touches the November ground. The colours are deep gold… if the leaves survive from winds that can strip a tree in a night.

Oversley Wood, in South Warwickshire, may be just a mere 230 acres. But it is packed with trees – mature mixed hardwoods and evergreens. Here, there is lime, beech, holly, wild cherry, oak and ash in an ancient woodland so old its name goes back to  a Saxon lord called Ofe who used to own the forest. Its wood was used to build medieval Alcester, provide bark for the Evesham tanners, the ash for farmers’ tools.

I have tracked the changes in this forest and, for the past month, I have been every week to watch its passage from the final vestiges of autumn warmth to the beginning of sparse winter.

Now it sits quietly, snugly, near sleepy Alcester. On a quiet day (and there are lots of them midweek) the trees reach up for a pale blue November sky. As in here: 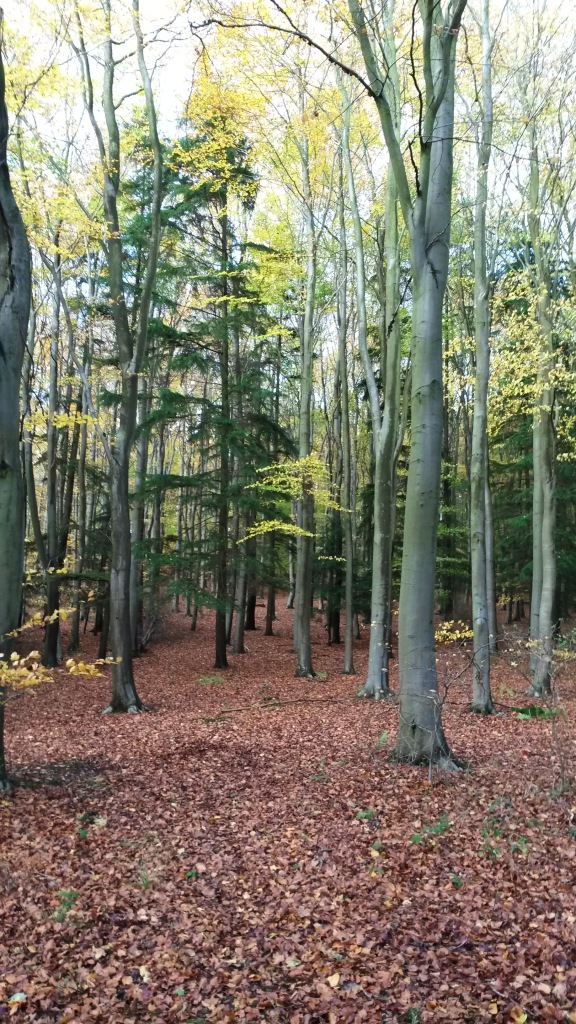 Oversley is one of the few remaining remnants of the Forest of Arden, an old woodland of charcoal cutters, foragers and foresters. And, of course, home to a ragtag army of Shakespeare’s characters heading for the mystery of the woods to sort out their lives.

Today the deer are still peeking out from the copses and trees, easier found in winter without deep foliage. Foxes keep watch and, in spring, bluebells carpet the floor. July plays host to Purple Emperor butterfly congregations swooping in the pines. Orchids can be found with a diligent eye beneath your feet.

South, between this wood and Bidford-on-Avon are hushed Warwickshire villages tied to country lanes: Exhall, Wixford, Temple Grafton and the wonderfully named Little Britain. And running to the west is Icknield Street, a Roman road that threads north from the Cotswolds through Alcester, with its Roman origins, to what is now Birmingham. The 2,000 year old track is still there, still on maps, still walkable, still guarded just north of Wixford by St Milaburga church which I have unsuccessfully tried to enter many times over the past twenty years.

And haphazardly dotted around Oversley and nestled in the valleys of the rivers Alne and Arrow are farms and minuscule hamlets that speak gently of the area: Rosehall Farm, Summer Hill, Primrose Hill, Mount Pleasant.

7 thoughts on “Through an early winter wood”