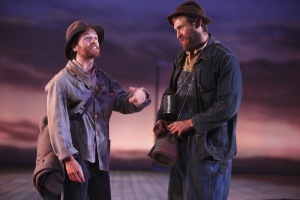 Richard Lutz takes a pew to see the latest incarnation of the Steinbeck classic.

American author John Steinbeck put it pretty simple and straight. In a letter about his novella Of Mice and Men, he said the story “was designed to teach me to write for the theatre.”

Well, there you go. No wonder the sad, doomed tale about two Dustbowl labourers, George and Lenny, comes back so often to the boards to recount how the pair get into trouble as they sign on for work at farm after farm and have to ‘lit out’ in the dark of night.

The trouble, of course, stems from lumbering simple Lennie who as a childlike innocent can’t keep his hands off the things that fascinate him: little field mice, puppies and, tragically, the crew boss’s flirty wife, played with forlorn sparky desperatio  by Lorna Nickson-Brown.

But this is more than a story about how things go wrong. It’s also a drama about lonely people, with vivid but hopeless dreams as they contend with poverty, dead-end manual work, ruthless farm owners and a sense of isolation as they grope from job to job.

Each character in the Steinbeck novella seems to envision a better life. George (played with knowing sadness by Michael Legge) and Lennie (a goofy, wide-eyed Benjamin Dilloway) dream of a little farm in the hills; old Candy tags along with this unattainable rural fantasy; crippled black labourer Crooks wants a scintilla of dignity rather than race hatred and the hapless female lead simply called Curley’s wife, mentioned above, just wants someone to talk to.

The southwest cornfed American drawl tends to fade at times and the story is so well-known that there is little mystery about how it will unravel (and unravel it surely does). But the production does tick along, helped by some serious live country music to punctuate the script and a set design that draws you into the great western outdoors.

So, a worthy, well-drawn staging of a classic tale, produced to a high standard and, I might add, mightily received by the scores of school kids who, I suspect, were reading the novella for their studies.