The loonies from UKIP may be on the rise in Britain. But watch out for another political dark horse, warns Sir Howard Elston (OBE)

A shock by-election victory by the Uklegg fringe party means the British politcal landscape may be on the verge of change.

Uklegg won the Weston-on-Dickhead ballot last nght when it polled one vote aganst a wide range of candidates including the Tory Anti-Immigration Party, the Labour Let’s Stop Illegal  Immigrants Party, and UKIP Let’s Stop Everything Party. 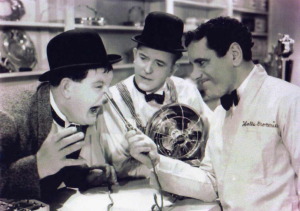 Uklegg leader Sir Nik Klegg, currenty lapdog-in-chief to Dave Cammo (PM), warned after the shock poll result was announced at 4.33 AM: ‘Let Britain be warned that Uklegg is now on the political agenda.’

‘We stand for everything that will get a vote. We will backflip over tuition promises, bombing wedding parties in Iraq with drones and spinning stats to argue an environmental point about wind farms or fracking’

‘Plus in an effort to emulate the egregious ragbag of UKIP nut cases (who we secretly admire) , we will blame everything on the EU and foreigners. We can be morons like anyone else.’

Klegg (far right): We can be morons too

Colonel Klegg,who has been at Dave’s knee for nearly five years as the Tories systematically flushed the UK down the toilet, added: ‘Yes, we have been in a coalition with Cammo and his grubby smug crew.’

‘But I can honestly say we here in Uklegg have not contributed one thing to the government since we hooked up.’

Phil, a well known second hand car dealer from Leeds and a political analyst somewhere up north remarked as he grabbed a Yorkie bar and swaffed a quickhalf of Theakston’s Royal Salute while perusing an Alan Bennett compendium: ‘Uklegg is a force to be reckoned with. They have no ideas, no moral compass and want to jerk Britain back to the politics of the 1830’s…which is just fine and dandy for many voters.’