Stardom on horizon for Harry. 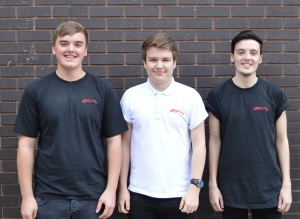 A star-in-the-making from Birmingham Ormiston Academy is relishing his role in the popular television series Peaky Blinders, after a successful open audition earlier this year.

Harry Kirton, who joined the academy’s acting pathway in September, has been starring on the small screen as Finn Shelby in the popular BBC drama. The 16-year-old from Northfield joined the all-star cast for the second series, appearing alongside Cillian Murphy and Tom Hardy.

Peaky Blinders is a historical drama set in Birmingham just after the First World War, which follows a criminal gang and their ambitious and highly dangerous boss, Tommy Shelby. The second series premiered on 2nd October, and sees the Shelby family expand their empire, while maintaining a stronghold in their Birmingham home.

Harry said; “I didn’t ever expect to land such a fantastic role when I went to the open audition. To have been selected from the hundreds of applicants was surreal, but I’m so excited to be a part of such an iconic Birmingham series.

“It’s a fantastic opportunity for me to star alongside such a talented and well known cast, and I hope it will be the perfect starting point for my future career.”

Harry isn’t the only BOA student to be involved with the second series of Peaky Blinders, with three other pupils providing authentic Brummie voiceovers for the cast.

Joey Dunnion from Stechford, Harry Kinman from Leamington Spa and Ethan Carless from Cannock, all in year 13 on the acting pathway, were invited to London to attend the voicing session. Having spent a day in the recording studio, the boys’ voices have been used to provide Finn Shelby’s gang with realistic Brummie accents.

Gaynor Cheshire, principal at BOA, said: “We have so many hugely talented pupils here at Birmingham Ormiston Academy and the fact that four of our students have been selected to be involved in such an exciting series like Peaky Blinders is testament to that fact.

“Whilst we value academic and vocational learning equally, we always encourage our students to gain practical experience within their chosen industry as this will stand them in good stead for the future in the world of work.”