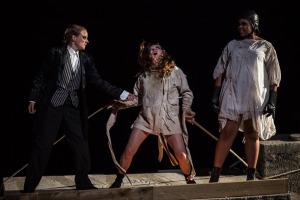 A horde of female vampires will descend upon Birmingham this Halloween as the Mac theatre plays host to an audacious new all-female adaptation of Bram Stoker’s Gothic masterpiece Dracula.

Entitled Dracula: The Kisses… the show is being produced by theatre company Scary Little Girls following a hugely successful national tour and sell-out run at the Edinburgh Festival.

Strictly limited to two Halloween nights only – 30th and 31st October – theatregoers at the arts centre in Cannon Hill Park can catch a glimpse of the all-female cast that played to packed houses at Cornwall’s magnificent Minack Theatre last month.

To find out what we can expect from this eagerly-awaited show, we spoke to Scary Little Girls’ Artistic Director Rebecca Mordan.

“Bram Stoker’s original Gothic tale is a ripping good yarn that’s packed to the brim with sex, vampires, power struggles, seduction, lust, gender politics and the supernatural,” said Rebecca. “It’s also a classic piece of Victorian fin de siècle literature and one of the most enduringly popular myths ever created. Each generation can find something new in this universe, and for us, this means making it true for women today.

“If you want to create a modern 21st century version, you have to address these issues, and by casting an entirely female ensemble you completely transform the text. The white negligees are still there, but the positions of power in our production are all played by women. So while we’re focused on producing this wildly entertaining romp, we also want to give the text a new, more modern lease of life for contemporary audiences – to make you think as well as make you laugh.”

The actress playing Dracula has been confirmed as Illona Linthwaite, who is famous for her performances in Outskirts by Hanif Kureishi for the Royal Shakespeare Company and Phaedra Britannica by Tony Harrison for the National Theatre.

The director at the helm is Helen Tennison, whose impressive credits include the 2008 Globe Theatre season, Antony and Cleopatra, Sense and Sensibility and Madame Bovary, which was Time Out magazine’s Critics’ Choice and was nominated for seven Off West End Awards including Best Director.

“We’re all very excited and focused on creating an ambience that is charged with electricity to give us a brooding, menacing and chilling atmosphere,” said Rebecca.

If you’re worried the performances will be too bloodthirsty, you can relax… just a little, she adds: “One of our trademarks is the ability to infuse and complement dark themes with humour, wit, intelligence and fun.

“Since this production marks the 10th anniversary of our production company, we can’t imagine a more perfect text to celebrate a decade in theatre. Or a better place to do it.”