Rare behind the scenes look into aircraft conservation.

This November, the Sir Michael Beetham Conservation Centre at the Royal Air Force Museum Cosford will once again be opening its doors, allowing museum visitors behind the scenes access to aircraft conservation projects and the chance to speak with the team who make them happen. This rare and exclusive opportunity is for one week only and based on the overwhelming success of previous events, organisers are expecting thousands of visitors to attend. 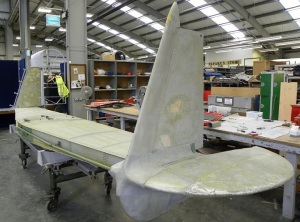 During the last year, significant progress has been made to one of the centre’s longest running conservation projects, the Handley Page Hampden and regular visitors are sure to be astounded by the developments being made. The Hampden’s tailplane, fin and rudder have been restored, incorporating as much of the original parts and materials as possible.

Some sections have been reproduced by Aircraft Technicians and apprentices who worked to the original technical drawings and soon work will commence on the elevator, which will be entirely manufactured on site. The Hampden’s rear fuselage is nearing completion and structural work is taking place inside the tailboom to repair the damaged framework and skins.

The Hampden suffered significant damage when en-route to Murmansk in Russia for convoy defence duties as part of 144 Squadron. It was shot down on 4th September 1942 during its transit flight and three crew members died, although two survived to become prisoners of war. The wreckage lay on the Kola Peninsula, Northern Russia until 1989 when it was rediscovered. The RAF Museum acquired the airframe in 1991 and although progress is being made, the aircraft still requires substantial work before going on public display.

Aviation fans and public who have followed the story of the world’s last surviving Dornier Do 17 will know the forward fuselage, engines and propellers have now all moved from the hydration tunnels into the Conservation Centre for treatment. While the wings will remain in the hydration tunnels until later this year, the majority of the aircraft will be on display inside and visitors will be able to get up close to the aircraft for the first time.

Volunteers will also be working on some of the smaller Dornier components during Open Week giving visitors first hand access to the intricate work taking place to conserve this unique aircraft. 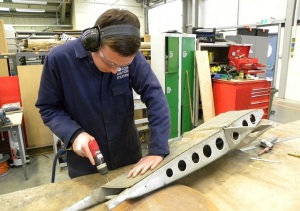 Repeat visitors will be able to view the on-going refurbishments of the Vickers Wellington. The structural work to the aircraft wings and flying controls along with the surface finish is now complete and the next stage will see Technicians re fabric the wings. Work will then commence on stripping the internal fuselage to allow for structural work to take place. The Wellington is expected to remain at Cosford for a few more years before eventually going back on display at the RAF Museum London.

Darren Priday, RAF Museum Conservation Centre Manager says: “It has been a very busy year for the conservation team in particular with the work carried out on the Dornier Do 17 and the Hampden. The last 12 months has also seen a lot of aircraft movements both here at Cosford and at our sister Museum in London in preparation for the First World War in the Air exhibition due to open later this year at both sites.

“We hope visitors will take this opportunity to speak with our team of Aircraft Technicians, Apprentices and Volunteers about the conservation work they carry out on the hundreds of aircraft within the museum’s collection.”

Admission to the Conservation Centre Open Week is £5 per person with proceeds going towards supporting the museum’s collection (Children under 16 are free and must be accompanied by an adult). The Conservation Centre will open to the public from the 9-15 November 2014 between 10.15am to 1.00pm during Open Week.

The museum’s other hangars will be open from 10am until 5pm, entry is free of charge. For further information, visit www.rafmuseum.org or call 01902 376200.