A glittering line up of chart-topping acts and the finest local music talent has been announced for the first ever Big Boro Festival, to be held at Nuneaton Town Football Stadium on Saturday May 31st. 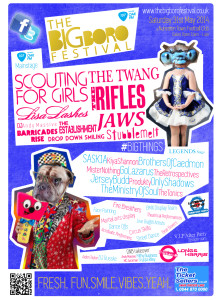 Popular chart topping indie group Scouting For Girls will headline the event alongside Birmingham rockers The Twang and the recently reformed original line up of The Rifles, ahead of their scheduled appearance at V Festival in August.

Also confirmed for the main stage is local indie rockers JAWS, who are enjoying one of the best years of their career after recently releasing their new single Think Too Much, Feel Too Little and announcing a new nationwide tour. They will be joined on the main stage by local art rockers Stubblemelt, who will be playing some of the songs from their new album Gyapaetus Barbatus for the very first time in a major music festival. DJ Andy Massive, The Establishment, Drop Down Smiling and Barricades Rise complete the main stage line up. With a two-hour DJ set to close the show from Lisa Lashes, and up to 5,000 visitors expected, the Big Boro Festival is already looking like one of the most exciting new music festivals in the calendar.

Confirmed for the legends stage at the event is singer-songwriter Sask1a, folk rockers Brothers of Caedmon, Leicester talent Jersey Budd and Nuneaton three-piece rockers Go Lazarus. They will be joined by the likes of Ministry of Soul, Kiya Shannon, Mister Nothing, The Retrospectives, Produkty, Only Shadows and The Tonics in what is shaping up to be an exciting new music event.

The Big Boro Festival will be covered from start to end by its new sponsor, Warwickshire radio station Oak FM. The station recently underwent a facelift and replaced its adult contemporary image with a more modern, popular music feel.

Early indications are that the festival will be a popular event so organisers are urging music fans to book their tickets fast. A spokesperson from The Big Boro Festival said: “We are delighted to have such respected and established acts confirmed for the festival and it looks like it is going to be a really exciting event. By mixing established artists with fresh local talent we are showcasing some of the amazing potential that exists in the Midlands and by holding it in Nuneaton, we are also demonstrating the region’s capacity to hold large scale, popular music events. We are hoping that the festival will prove so popular, we can put something similar on again next year.”

Fans can get their hands on tickets for the inaugural event online from www.thebigborofestival.co.uk or at www.theticketsellers.co.uk. You can also see when new further acts are added to the bill by following @BigBoroFestival on Twitter or following the hashtag #BigThings.