Plenty in store at the city centre’s top venues. 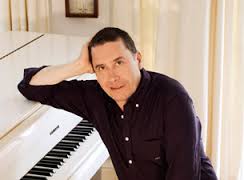 This highlight of International Dance Festival Birmingham 2014 presents a world premiere of a unique collaboration from Ex Cathedra, dance company Cas Public and a cast of UK performers at Symphony Hall on 2nd May.

The lead vocalist, hugely accomplished flautist and acoustic guitarist of the classic British rock band returns to Symphony Hall on 3rd May to celebrate the release of his forthcoming solo album.

The Mercury Music Prize nominated pianist and the renowned Norwegian bass player Ole Morten Vagan come together at the CBPS Centre on 9th May to perform with their respective groups.

New Zealand’s Flight of the Conchords star and “time-travelling disco soldier” as one comedy site described him, returns from his adventures to share them with us all at Birmingham Town Hall on 20th July.

Returning to the UK after an absence of nearly ten years the eighties pop icons perform a string of their greatest hits in the renowned acoustics of Symphony Hall on 22nd July.

The Leicester rock and roll revivalists group appear live at Birmingham Town Hall on 21st September, armed with a big bunch of hits including Under The Moon of Love, Three Steps to Heaven and Hey Rock & Roll

SHOW OF HANDS WITH MIRANDA SYKES

The acoustic multi-instrumentalist roots duo of Phil Beer and Steve Knightley, along with the rich harmonies and powerful double bass of Miranda Sykes, make a welcome return to Birmingham Town Hall on 6th November.

Birmingham Town Hall extends a big willkommen to the self-appointed German Comedy Ambassador to The United Kingdom, live award winner and star of TV and radio on 13th November.

Tickets £14.50 on sale from 10am Friday 7th FebruaryRAYMOND FROGGATT IN CONCERT

Bordesley Green’s very own rock and roller Froggie returns to the stage on 4th December at Birmingham Town Hall with long-time colleague Hartley Cain and band after celebrating half a century in the business .

The world’s most successful Fab Four tribute band bring back their note-perfect renditions of the Beatle’s repertoire, plus spectacular costume changes and an incredible visuals to Symphony Hall on 15th December.

JOOLS HOLLAND AND HIS RHYTHM AND BLUES ORCHESTRA

Tickets on sale from 10am Friday 7th February