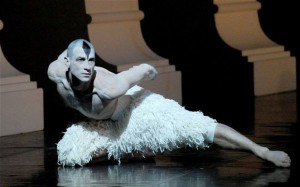 If you go into my local park this damp winter, you will see swans, usually in conjugal pairs, floating effortlessly on the water. But raise their ire and they can go for you. They are wild and, I would think, not to be messed with. They like life just as it is.

Swan Lake, the Tchaikovsky ballet, tells the fairy tale of a young prince hemmed in by unloving stuffiness who discovers  the fantastical freedom of the swans as an escape.

This 130 year old ballet is so popular that it has a life of its own.

Nineteen years ago though, Matthew Bourne re energised it with the juice, the colour and the sass of the modern age.

It is beautiful to see and, of course, populated with all those hunky men swanning  and swirling about. It is a glorious night out. 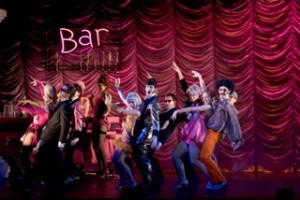 The story remains the same but supercharged into the 21st c.    Bourne says that his Swan Lake of 1995 has been re worked plenty of times to update it, keep it edgy, keep it good looking, keep it cheeky. As they say on The Voice each Saturday night on the tv, he keeps it “fresh”.

So, the Prince heads for a West End-ish dive called Swanky,  gets loaded, get roughed up and ultimately snapped by the tabloids drunk and shabby.

The palace ball is a dominated by a bit of muscle with leather trousers and a leer. The Prince’s lover is a good time girl who always gets it all wrong, is gauche but likeable and could be, just maybe, modelled on the Chelsea lasses on the royal hunt.

Now that would be telling.

Set design is an eyeful, costumes are terrific and you have ‘til mid February to enjoy it

*On Feb 13th, before the production, 13-18 year old students  from Walsall, Stratford and Birmingham will perform under the guidance of Dominic North, one of the Matthew Bourne principal dancers