Delegates at next month’s international real estate show, MIPIM, will get a unique taste of Birmingham’s growing independent food scene, when they tuck into special snack boxes being flown over for the event. 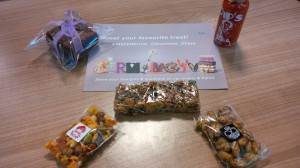 The 200 boxes have been put together by Birmingham street food experts Brum Yum Yum, who have teamed up with four independent producers who attend their monthly market in Kings Heath.

The boxes will be given out as a pre-lunch snack to some of the 20,000 visitors expected over the four days of MIPIM, from March 11th-14th. Each snack box includes:

·         On The Go Granola Bar and Triple Chocolate Brownie – both from Mrs Mills Makes Cakes www.mrsmillsmakescakes.co.uk

The boxes will also contain a call to action for visitors to tweet both their favourite treat and to share thoughts and comments during the show.

It is the latest initiative in Marketing Birmingham’s Birmingyum campaign, which aims to shine the spotlight on the region’s food and drink festivals and raise the profile of local food producers, farmers’ markets and world-renowned restaurants.

Ian Taylor, commercial director at Marketing Birmingham, said: “These snack boxes will give people a real ‘taster’ of Birmingham’s burgeoning foodie scene; MIPIM is a high profile international show and we think this is a great opportunity to get the city’s foodie message out to an audience we otherwise might find hard to reach.”

Duncan Stanley, founder of Brum Yum Yum, added: “We’re really proud to have been asked by Marketing Birmingham to produce these snack boxes; this is a unique way of not just promoting the city’s great independent food producers, but representing Birmingham at such a prestigious event as MIPIM.”