Anais Mitchell plays Birmingham next Wednesday. Martin Longley has already witnessed her up in the wilds of Yorkshire’s East Riding. 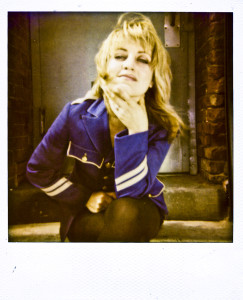 Only a few days before this gig, Vermont native Mitchell had picked up the award for best traditional song interpretation at the BBC Folk Awards. From the Royal Albert Hall up to the intimate Pocklington Arts Centre in the East Riding of Yorkshire: quite a considerable change of scale!

That old chestnut, Willie Of Winsbury was performed by Mitchell with Jefferson Hamer at the Albert, lifted from the pair’s recent Child Ballads album. In Pocklington she sang it alone, uncertain about its existence when shorn of her collaborator’s harmonies. Mitchell shouldn’t have been concerned, as her voice is eminently capable of adjusting, with its own highly individualist phrasings. Lonesome interpretations of songs she’d recorded with other voices were unavoidably a central part of the show, as there were also several selections from her ‘folk opera’ ensemble concept piece Hadestown.

About midway, Mitchell began to invite requests, which were unsurprisingly dominated by suggestions for songs from her earlier albums, notably 1984, which was penned around a decade ago but still sounds exceedingly relevant, with all of these NSA shenanigans.

This was an extremely intimate gig, with a completely attentive audience, plunged into Mitchell’s expressive universe of song. She couldn’t actually see the crowd, caught in her isolated pool of illumination, but this didn’t prevent her from communing closely.

Most of the evening’s ditties were her own, traversing a wide range of subjects and moods. Mitchell will be dealing with larger topics one moment, then getting into a very autobiographical detailing once the next song’s arrived. She has just the right balance between playful casualness, where struggles with a fluctuating guitar-tuner prompt light-hearted comments, to a sudden imposing of stark seriousness, as a fresh lyrical tale is unwound.

Her guitar playing is much more involved than is the case with most singer-songwriters, loaded with decorative flourishes and complex mini-solos. She has a voice whose strong traits might divide some folks, but her constant limber acrobatics sound like they’re in the service of naked expression and communicative purposefulness rather than being thrown in for sheer ego-technical show-off-ery.

This was a very short set, barely hitting the hour mark, but it was undiluted and constantly demanding of full attention, a condensed delight that might have had the audience breaking out of its spell if Mitchell had played for, let’s say, ninety minutes or more.

Anaïs Mitchell is at the Glee Club, Birmingham, on Wednesday 5th March .