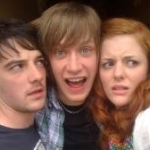 Daniel Sloss started out as the young pretender of British comedy by beginning his stand-up career at the age of 17, making his first TV appearance two years later and now at the ripe old age of 23 he’s toured around the world and has a string of television credits that would take far too long to list. But he’s still That Young Comedian to many people, so does the tag annoy him?

“It does, but I don’t get it so much now because I’m 23. When I started I was talking about being young but I haven’t mentioned my age for about four years although it’s still something people tend to focus on and the reason for that is because my comedy is very self-centred, it’s about me and my life.”

Does that mean you’ve have to re-think your approach, now you’re a worldly-wise twentysomething?

“It’s just evolved with me. As I’ve grown up and changed so has my comedy. It’s always been focused on me, my thoughts, what’s going on in my life. It’s always been about my age in the way I’ll talk about stages in my life or what happened when I was growing up.”

Is it just old age, or are comics really getting younger?

“It’s the exposure now. The reason everyone says comics are younger is that younger comics are getting on television. But some of the greatest comics started when they were 14, 15 or even younger. A bunch of British circuit comics started when they were that age. It’s good for comics to start young, I attribute a lot of my confidence on stage to when I started. I had the arrogance of youth. I didn’t think I could go on and be anything less than perfect. Actually it wasn’t arrogance, I was just so naïve that I couldn’t think there could be a situation where I wouldn’t go down well. You don’t even know that what you’re doing is scary. You don’t have the life experience to know that what you’re doing is incredibly nerve-wracking. But now I’ve got six years under my belt – today’s my sixth comedy birthday, six years since I started at the Stand in Edinburgh. At the Stand I always go to do new material and there are new comics between the age of 25 and thirty, they’re dead nervous and when they ask what I was like I say I wasn’t smart enough to realise that I should have been nervous.

You’ve been touring Scandinavia recently. That doesn’t seem to be a particular hotbed of comedy.

“You wouldn’t believe how big the stand-up circuit is in Sweden. I didn’t understand it myself but there’s a guy named Mike Räsänen who promotes a gig called RAW comedy. He got me to do a hotel in Stockholm which was great, 200 people, then he asked if I wanted to do a TV show. So I do this TV show, every other comic on the show is doing their stuff in Swedish and the audience are laughing, I come on and did a set in English and they still laughed. They totally get it, in their second language. Then in February I did a two week tour and we were selling out 1,000-seater venues. Their comics such as Ozz Nujen and Soran Ismail are huge stars, and I was on tour with them and it blew my mind. Sweden is much forther ahead when it comes to social issues. It’s a country that’s 85% atheist, gay and women’s right are years ahead of the UK but it’s just so expensive.”

You’re touring a new show. What will you be doing this time round?

“It’s me doing stand-up for an hour. There’s no theme, no moral, no lesson to be learned or heart-warming ending. It’s just stand-up, and it’s the most proud I’ve ever been of a show. I cover a whole variety of things from atheism, to my plan to solve all the world’s problems, to the USA, to

“I’ve done them both before. Two years ago I played the Slade Rooms, I didn’t think we’d enjoy it because it’s a music venue but it turned into one of the best gigs on the tour.  We play the Glee Club regularly throughout the year, go on and try out twenty minutes. The staff are lovely and it’s always great fun there.”

Given that you’ve done so much at an early age, what other ambitions have you got?

“When I was 18 I was asked what my dream was and I said to be making a living doing stand-up comedy. I’ve done that so to have any other dreams or aspirations would be very selfish. I’m so happy where I am, I tour the world doing comedy and if I can maintain this for the rest of my life I’ll be happy. I wouldn’t mind being an actor if the right project came along but my heart is very firmly in stand-up comedy.

You’ve said before that you don’t think you’ll live a long life.

“My mum hates me saying that I’m going to die before I’m thirty but things have gone so much better than I expected, I’ve been incredibly fortunate and I think that if karma exists I am due cancer very soon. There’s a car with my name on it ready to run me over any day.”