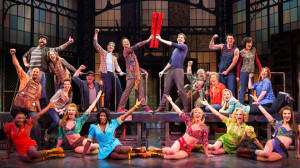 Visitors to New York can get their kicks from a show that’s unlikely to wear out.

Fit for “ladies and gentlemen, and those that are still to make up their mind” – as the catchline of the main protagonist goes – Kinky Boots explores themes of finding passion, overcoming prejudice and debunking stereotypes with the fanciest of footwork.

Winning six categories including top prize of best musical at this year’s Tony Awards, this uplifting Broadway production has its foot in a true story about a struggling British shoe company in Northampton that successfully diversified for a while making exotic shoes before eventually closing down.

Written by Harvey Fierstein with music and lyrics by Cyndi Lauper, the show is based on a 2005 film of the same name and gives a nod to Harold Brighouse’s Hobson’s Choice.

Comparisons with David Bintley’s wonderful production of the Edwardian comedy for Birmingham Royal Ballet can be made from the moment the show curtain appears and acts as an imposing façade of a footwear business. But rather than Henry Hobson’s shoe shop, we are facing the exterior of the factory of Price & Son, Northampton, England. The frontage sign will no doubt be shortened for UK audiences when, as tipped, the show eventually transfers to the West End.

And in place of a tough-minded bootmaker’s daughter saving the profits of her father’s shop from being frittered away on drink, we are introduced to a saviour dressed in drag. When Charlie Price, played by Stark Sands, inherits the family business he finds that it is making shoes that no one wants. But hope arrives in the form of Lola (Billy Porter) and her fellow cross dressers who need stilettos and thigh-high boots made for men.

The plot hinges on whether the factory workers can overcome their prejudices and turn out a range of boots in time for a show in Milan, and whether Charlie and Lola can unload their emotional baggage in relation to their respective fathers along the way.

Predictably all ends well in a show that preaches a little too much and distracts (to an English ear) with a sometimes strange mix of accents. Nevertheless the songs, a fusion of soul and disco styles sung and danced to on a factory set that includes an operational assembly line, are rousing crowd-pleasers.

Lola and her Angels give a memorable lesson in aesthetics with their most exuberant song Sex is in the Heel, while the finale ‘Raise You Up’ sends you off into the Broadway evening with a number you can easily hum.

Annaleigh Ashford as the factory girl Lauren who falls for Charlie gives a marvellous solo with The History of Wrong Guys,  but the show belongs to the acting, singing and dancing skills of Billy Porter whose message of acceptance is still so appropriate today.