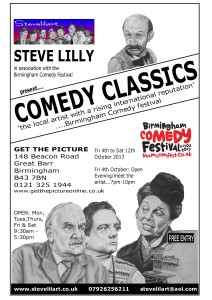 Local cartoonist Steve Lilly will be exhibiting at his fifth Birmingham Comedy Festival in October and to celebrate he will be unveiling his most ambitious project to date. Best known for depicting large group portraits of famous comedy acts ‘Allo, Allo!’ has a whopping 18 characters and has been on the drawing board for nearly two years. Great Barr born and bred Steve is putting the area on the comedy map with an intimate exhibition at Get the Picture. Renown for an excellent bespoke framing service and local celebrity Charlie the golden retriever, Get the Picture will play host to Steve for the duration of the festival. “As far as I know Great Barr has never featured as a venue for any of the previous eleven festivals and it’s about time that it did”.

Steve Lilly is an award winning artist with over 20 years experience creating unique pieces of pencil rendered artwork. His pictures are now very collectable with many of his original pieces in private collections.

The Birmingham Comedy Festival has been drawing (pardon the pun) attention to the city’s vibrant comedy scene since 2001 when the debut festival hit the ground running, thanks to appearances from Peter Kay and Sean Lock. Since then, the festival has grown into one of the largest independent arts festival in the region. Alongside a vast range of new local acts, the festival has featured such A-list heavy-hitters as Lee Evans, Michael McIntyre, Frankie Boyle, the cast of cult TV sketch series The Fast Show, Lenny Henry and Ross Noble.

The second most popular event of last year’s festival, based on unique visitors to the official festival website, was … Steve Lilly, beaten by John Bishop and beating the Hairy Bikers!