Plenty to do from now until Christmas. 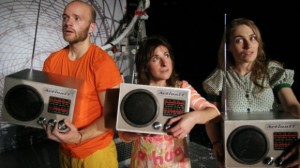 If you’re a child it may seem a long while since the school holidays and ever longer until Christmas, but at Warwick Arts Centre there’s plenty to look forward to in the run up to October half -term.

As part of the nationwide Family Arts Festival, children’s favourite Michael Rosen will be performing his new poetry show Centrally Heated Knickers in his characteristic, larger-than-life style. The show arrives on Monday 28th October, bringing surprises, songs and musical flights of fancy from The Homemade Orchestra.

Action Transport Theatre are transmitting hilarity on all frequencies in STATIk, an energetic and highly entertaining theatre show for ages five and over on Saturday 12th October. Full of clowning and featuring a glorious soundtrack, STATIk is the story of how a beautiful but regimented world becomes all the more colourful and chaotic when one person dares to be different.

For a real half-term treat, there’s Bank On It, a site-specific, interactive, promenade theatre experience for children from Theatre Rites. Bank On It is a magical journey into an interactive bank where even the most mundane office equipment comes to life; a hunt for an elusive bank manager designed to get children thinking about resources and what money can and cannot buy. With performances on Saturdays 19th and 26th October, and all throughout half-term week from Monday 28th October–Saturday 2th November, Coventry is the only place you can see Bank On It in the UK after its smash-hit London run, and a new branch of the bank will soon open in a super-secret city-centre location!

Beyond half-term, as the leaves drop off the trees, there’ll be a chance to meet a prehistoric pet in the Danger Seats at the Dinosaur Zoo, and this year’s Christmas show is Room on the Broom from Julia Donaldson.