Motorway police are launching a new safety initiative aimed at cutting down on inappropriate lane use. 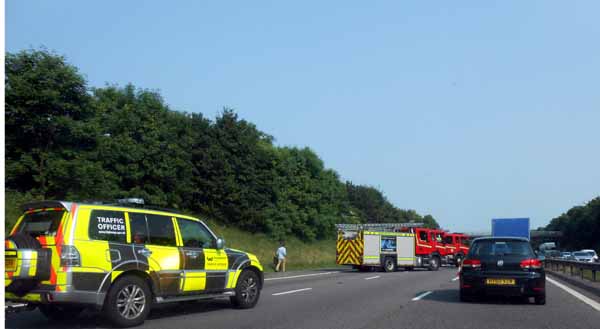 A pilot scheme aimed at reducing the number of drivers illegally using the hard shoulder on Midlands motorways could see motorists warned or even fined for their conduct.

The new initiative coming to the Midlands next month is being launched today by the Highways Agency and Central Motorway Police Group today and is being marked by a behind the scenes look at the complex work and daily flow of information that streams into the region’s motorway cops every day. Throughout the day, Twitter followers can take a sneaky look at how one of the country’s biggest motorway control centres operates.

Latest research shows that, in the West Midlands, hundreds of drivers have been spotted illegally using the hard shoulder by driving along it at times when it is for emergency use only. The Highways Agency and Central Motorway Police Group in the Midlands are calling on motorists to drive within the law and to not put their life and the lives of others at risk.

In the area of the M6 and M42 covered by managed motorway schemes which sees the hard shoulder become a live traffic lane to reduce congestion at peak times the Highways Agency displays overhead signs informing drivers that the lane is active, and what the current speed limit is. The scheme also informs drivers, with a red X, when a lane is out of use due to an obstruction or safety issue.

However, ignoring police signs can lead to delays and accident son the  Midlands’ motorway network. During monitoring of the M42 and M6 managed motorway sections in June 2012, the average daily misuse of the hard shoulder was between 20 and 100 vehicles per day. On three of the busiest motorway links across the West Midlands, figures show an average of 250 vehicles per day illegally using the hard shoulder. Most of this non-compliance was just before the hard shoulder opened to traffic for the peak periods or just after it had been closed.

Authorities want to see these figures drastically reduce and road users complying with the law. As part of a pilot scheme to increase good driver behaviour, from September, the police will be proactively monitoring drivers in the region. Any drivers misusing the hard shoulder will initially receive a joint letter from police and the Highways Agency, along with an educational leaflet clearly explaining the correct use of the hard shoulder. Repeat offenders could also find themselves facing a fine and points on their licence, as driving on the hard shoulder is illegal, as well as unsafe.

Chief Inspector Derek Roberts, from Central Motorway Police Group, said: “We don’t want to issue fines and instead want to encourage good driving behaviour, but people need to understand that travelling on the hard shoulder when it is not available as a traffic lane is illegal and unsafe  they could cause a traffic collision and put lives at risk.

He added,  “You should only drive along the hard shoulder when there is a speed limit over it. If there is a red X or nothing displayed above it, don’t drive on it – it is for genuine emergencies only.”

The launch of the pilot scheme is being marked by an inside view of the work of CMPG across social media.  Across the @WMPolice and @CMPG Twitter accounts followers will be able to see the complex work undertaken by the group which covers more than 400 miles of the Midlands motorway network

Jamie Hassall, Highways Agency national enforcement co-ordinator, said: “I hope all road users hearing about this will start to correctly use the hard shoulder, follow the overhead signs displayed and drive safely. Whether drivers are doing this because they are unaware or deliberately trying to exit the motorway more quickly, they are putting themselves and others at risk.”

The pilot hard shoulder compliance campaign will start in the Midlands from September.