National housebuilder and regeneration specialist, Crest Nicholson, will launch the first freehold new build houses to have been built in Birmingham city centre for more than two years at its Park Central development this weekend (10 and 11 August). 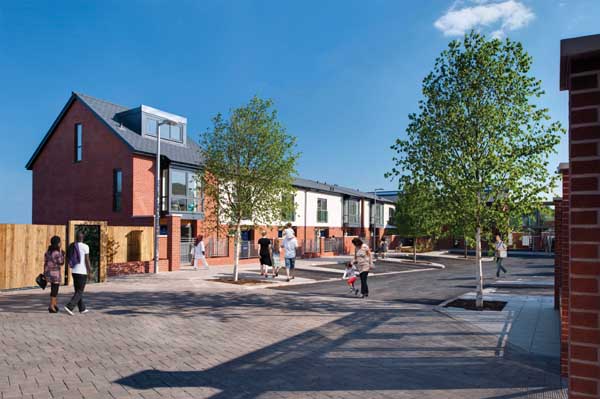 Ruth Williams, sales manager at Park Central said: “Until now, anyone searching for a new build home in Birmingham city centre has been restricted to buying an apartment. Thanks to the launch of Ellis Place this weekend, househunters now have the option of choosing a two storey house instead, giving them the benefits of extra space, more conventional family living and a rear garden.

“Purchasing one of the new houses from plan means that people have the added benefit of being able to have their own say on what their house looks like when complete. There are a number of designer kitchens for people to choose from, including variations in worktops, doors and handles, along with high-quality and eco-friendly bathrooms that boast stylish Porcelanosa tiling.

“A freehold house in the centre of the city really is a rare find and it means there are no leasehold or service charges for people to contend with – just the pure pleasure of owning your own home.”

Each of the new houses is fitted with a designer Symphony kitchen which, alongside the bathrooms, boasts stylish chrome eco-friendly Hansgrohe mixer taps. A Bosch oven, free standing washing machine and an integrated fridge/freezer all come as standard.  Additionally, all of the properties are covered by a 10 year NHBC warranty.

Construction is currently underway on the new homes, with the timber frames now in place for a significant number of the properties. It is estimated that the first homeowners will be able to move into the houses at Ellis Place in October.

The houses at Ellis Place will be sold alongside the luxury one and two bedroom apartments in the central phase at Park Central, Central Plaza. Both phases overlook the eight acres of parkland at Park Central and are part of the larger regeneration scheme which has seen Crest Nicholson transform the former Lee Bank area.

Those househunters wishing to be one of the first to see plans for the new houses at Ellis Place are invited to visit the marketing suite this weekend where the first reservations will be made. Alternatively, the sales office is open daily from 10am to 5pm and is located at 61 Mason Way, Birmingham B15 2GE.