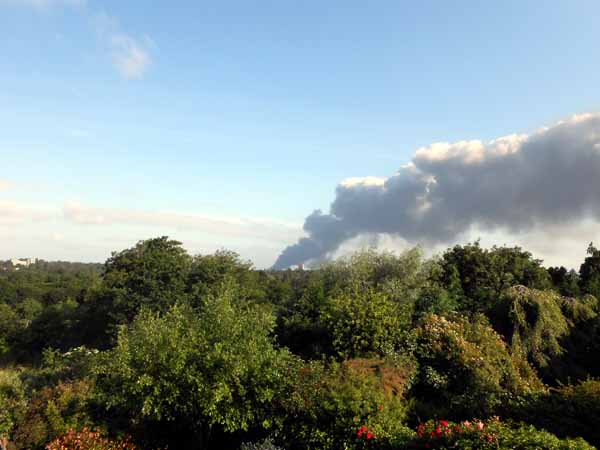 It appears that the serious fire at a recycling plant in Smethwick, which has been polluting the air over the West Midlands since the early hours of today, was ignited by a Chinese lantern.

Not for the first time these elegant, graceful devices – that waft flame aloft and float on the breeze – have caused mayhem and chaos for humans and dealt death to animals.

The Japanese used something similar in World War II, when they sent fire balloons adrift towards the West coast of the USA, killing a few and spreading fear.

In an age when we are all supposed to be addicted to health and safety the fact that these ‘weapons’ are available for general use is astonishing.

I’m not keen to ban things but it’s obvious that these lanterns are not safe to use and provide only fleeting amusement for their users.

I don’t think it would be asking too much for Lantern Lovers to forgo their moments of transient delight in order to save the rest of us from the consequences of their WMDs.

The pollution from the fire in Smethwick – burning plastic is not good to inhale – will be affecting people and wildlife for a long time to come, quite apart from the harm caused to Fire Service personnel while tackling this filthy blaze.

So, come on polticos, get your much loved banning gloves on and clamp down on these bloody lanterns.

One thought on “Declare war on Chinese lanterns”