A cheque worth over £1,000 has been presented to the Mayor of Wolverhampton in support of her designated charities. 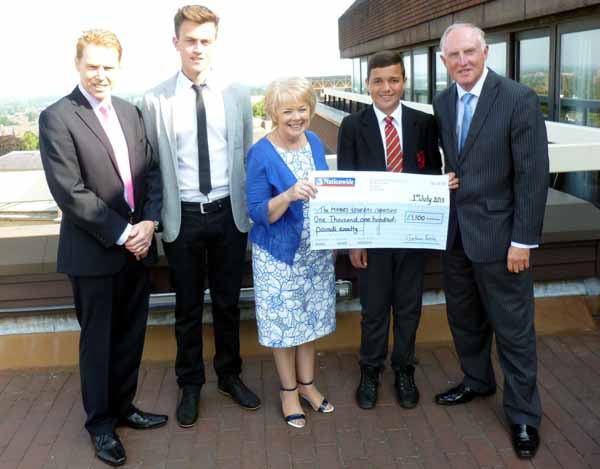 A cheque worth over £1,000 has been presented to the Mayor of Wolverhampton in support of her designated charities.

A total of £1,100 was raised through this year’s staging of the University of Wolverhampton’s annual charity golf day, organised by Principal lecturer at the University, Paul Hampton.

The event, held at Perton Park Golf Club, Wolverhampton, on Friday 17 May, featured 18 teams made up of University staff members, local businesses and commerce partners.

This year the Mayor, Councillor Christine Mills, chose Samaritans Wolverhampton, Compton Hospice and Help for Heroes as her chosen charities.

The cheque was presented to the Mayor by Paul Hampton alongside two promising young golfers from Cardinal Griffin High School, Cannock, and their learning mentor at the school.

One of the students, Mike Dewsbury, claimed the Junior European Open title last year and will be competing in the British Boys Amateur Championship at Royal Liverpool this August.

Speaking after being presented with the cheque, Cllr Mills, Mayor of Wolverhampton, said: “I’d like to express my sincere gratitude to Paul and everyone involved with the charity golf day for this donation which will be divided between three deserving charities.

“The golf day was a fantastic event and we were blessed with wonderful weather for it. I’m thrilled that such a fantastic total was raised and I’m sure the charities will be similarly delighted”.

Paul Hampton said: “Can I express my sincere appreciation to the sponsors, attendees and everyone who made a valuable contribution to the success of the day. I was delighted that we were joined by the Robert Rock Golf Academy, and can I thank Stephen Coakley and all the team for their work in promoting golf to a younger audience”.