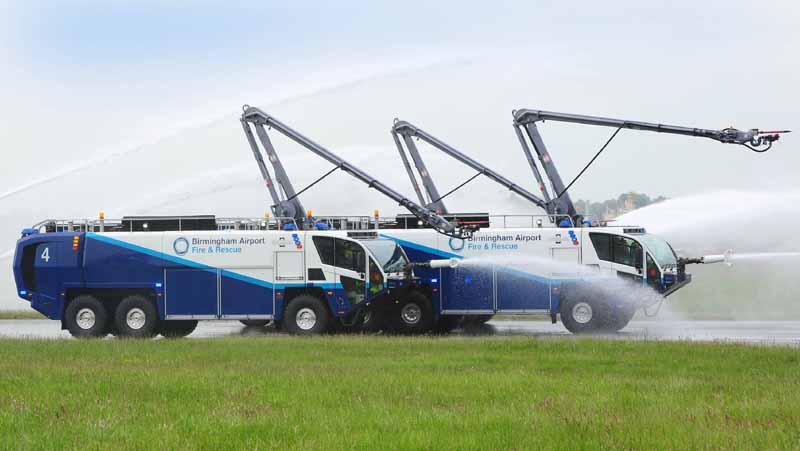 The Airport has invested more than £3m on the life saving equipment to replace its current fleet. The five ‘Striker’ vehicles have been purchased from speciality US vehicle manufacturer, Oshkosh Corporation, following a competitive tender process.

Three of the five new vehicles have extended boom technology, called ‘Snozzles’, which can penetrate an aircraft fuselage in the event of an aircraft incident, allowing direct and close range access to an on-board fire.  All manoeuvres of the Snozzle are controlled from inside the cab using various cameras and computers.

Additionally, two major foam tenders join the fleet, which can hold up to 1,600 litres of foam and 12,000 litres of water, delivered from a powerful pump with an output of approximately 7,000 litres per minute.

David Winstanley, Operations Director of Birmingham Airport, said: “In committing to this investment we are securing the long-term efficiency of our fleet to improve reliability and performance, and to ensure our fire fighting capabilities are commensurate to future aircraft size and configuration.

“The team are delighted with the new appliances and we’re grateful to Oshkosh for supplying these fantastic appliances that help us as we grow and provide a world class fire and rescue service for our business and partners.”

Oshkosh Corporation is a US speciality vehicle manufacturer based in the town of Oshkosh, Wisconsin. Oshkosh is a world leader in providing bespoke vehicles and its vehicles are used extensively throughout the US by airports requiring specialist fire fighting vehicles. Birmingham is the first UK airport to acquire fire vehicles from the Company. 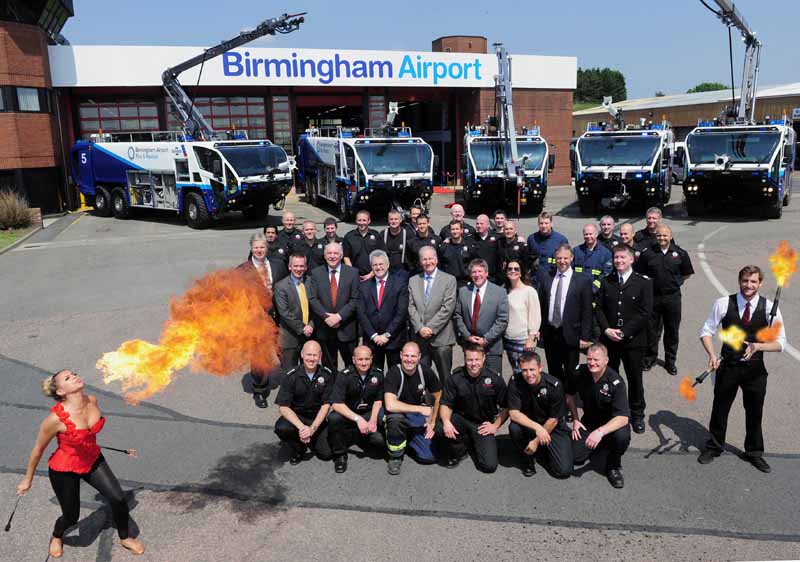 Jeff Resch, Vice President and General Manager for Oshkosh Airport Products, added: “We’re honoured to be able to partner with Birmingham Airport on our first UK Airport contract. The Birmingham team are forward facing and have a great vision for the Airport’s future success so we’re delighted to equip its fire and rescue department with our Striker fire vehicles to maintain safety on its aerodrome and meet future aspirations.”

All appliances are equipped with hydrochem fire nozzles that can discharge water and dry powder simultaneously and have in-built vehicle recorders that will catalogue the driver’s actions when responding to an emergency.

Forward and rear looking cameras are also featured on all the vehicles to provide information as part of any regulatory inquiry, as well as front facing infrared cameras (FLIR) for identifying hot and cold surfaces to aid in the rescue and fire suppression.

The vehicles can accelerate 0-50 mph (80 kph) in under 35 seconds – which is faster than the previously fleet – and are equipped with the Oshkosh TAK-4 all-wheel independent suspension for off-road driving. They also have improved turning radius and manoeuvrability with the rear wheel steer and greater braking power due to using all round disk brakes.