John Lee Hooker  jr tells Dave Woodhall about growing up with a legend. 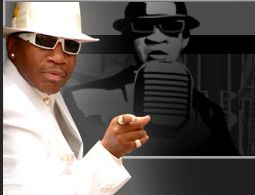 When your name is John Lee Hooker jr, you know from an early age that you’re never going to be anything other than a musician. Such a pedigree can add pressure to the most stable of personalities and John jr’s early life was the stuff of blues songs in itself, complete with life on the streets of Chicago and time in prison. But that’s all behind him now, he’s a successful recording artist in his own right and he spoke to us at the start of a short tour of the UK and Europe that includes a date at the Robin 2 this Tuesday (17th).

“I’ve just arrived in England. I played in Switzerland last night and that was a full house but this is my first night in the UK. I’ll be able to tell you later how that was but so far it’s packed houses. I’ve played in London before, on Charlotte Street, Charlotte’s Blues, but this is my first tour in the UK. The people are treating us well already and there’s going to be a great show tonight.”

You’ll certainly have an appreciative audience. Your father was always popular over here, maybe more so that he was at home.

“I think I first heard that from my dad because I used to hear him say that when he was in the UK this was his diving board, where people really recognised his music and he took off from what people in the UK did.”

Not only was he one of the few US bluesmen to come over here regularly – legend had it that he was the only one who wasn’t afraid of flying – but his style suited the British audiences.

“Exactly.  His style suited the British audience, and groups fell in love with him like the Dave Clark Five, the Rolling Stones, many, many groups loved him.”

You started in the music business at an early age, performing with your father aged eight on radio shows and then touring. That must have been quite an experience.

“I was asked to come out with him when he was touring and he wanted me to follow in his footsteps, had me in his lap on the train. That’s correct. It was an experience, walking on stage with hundreds of people watching and feeling all the energy.”

You didn’t really have much chance of not becoming a musician, did you?

“Not really, but it’s life. There’s a call, some get it and some don’t. There was the drugs and prison and living that destructive life, then one day I asked God to help me and that’s what he did. This happened in the eighties, it was my dad’s wish that he would see a clean, sober son, and when he left that’s what he’d seen.”

It was after he died that you began to record again.

“I toured, then in 2004 after much practising I released Blues With a Vengeance which was Grammy-nominated. Four years later we had another Grammy nomination with All Odds Against Me, so things have been going well. We won the WC Handy award, the California Music award, I just recorded with Betty Wright, we’re recording with the great Lucky Peterson. The cd All Hooked Up was released last year and it’s got the first ever blues animated cartoon, that’s what we’re promoting here. In Europe the cd is called That’s What the Blues is All About and now it’s just gone platinum.”

Your music is very contemporary, with elements of jazz and a long way from the traditional blues of your father. Was it a conscious decision not to imitate him?

“His was a delta sharecropper type blues and mine is more modern, contemporary yes. I didn’t make a conscious effort to be different to him, I didn’t go inside a studio or laboratory and say I have to take a drink to be different. Who I always was, that’s what I am today. The Grammies don’t take imposters or fakes or pretenders.”

So what is it that the audiences will see on this tour?