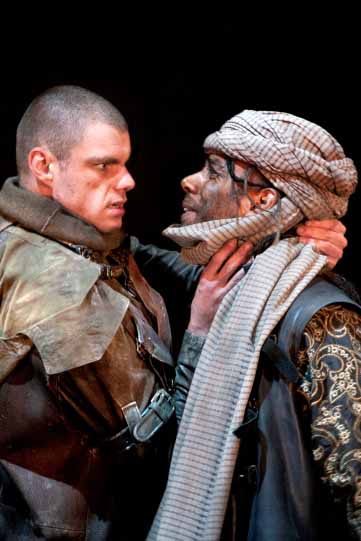 Matthew Needham as Lucius and Kevin Harvey as Aaron in Titus Andronicus. Photo by Simon Annand

A  table fork that had speared the semblance of a heart  landed near my press seat. It didn’t seem that out of place as Titus Andronicus is violent and bloody. I thought of Tarantino’s Reservoir Dogs film where halfway through, the viewer seemed simply desensitised to react because of the constant blood and gore.

This is Revenger Tragedy at its bloodiest and Shakespeare must have known his audience, an audience which regularly went to bearbaiting, cock fighting, beheadings and the occasional heretical burning. The crowd knew blood, the writer knew blood and it all made for good entertainment.

The RSC knows it is a museum piece. But once you get past the incessant gore or the threat of it, it is a straightforward headstrong story about power, vengeance and the crawl up the bloody pole to gain the top seat at the table.

Director Michael Fentiman, unfortunately,  does mix up his visual effects  though, draining away the brutal punch of Elizabethan bloodlust set in ancient Rome.

Costumes range from centurion to  early 20thc evening gowns to modern urban Goth (well, the Romans were fighting the Goths after all).  Titus Andronicus sits down in battle dress, has a ciggy, listens to the radio. Soldiers have medieval crossbows. It makes for a bit of a mishmash and takes away from the theatrics of how Elizabethans perceived ancient violence. I just don’t see why today’s directors have to mix up eras like this.

Good acting though from RSC veteran Katy Stephens as the Goth queen Tamora;  Kevin Harvey as her Moor lover, Aaron, who has the  sharpest lines; and star Stephen Boxer in the title role using his  feigned madness to ultimately stuff his revenge down his enemy’s throat by feeding  Tamora her sons’ remains baked in a pie.

Of course, it all ends in rivers of theatric blood, gore, mayhem and that forked human organ that rolled up the aisle towards me

So, not for the faint hearted. But  strong performances and a solid production.