Our Tammy has been out sampling the fare in Birmingham once more. She brings news of an independent in the heart of the city.

There’s a newbie in town, at the top of Corporation Street, that’s been creating a buzz amongst the other Brum café’s. When you walk in the smiling staff are mostly young but don’t let that put you off; they know their stuff.  Boston Tea Party (BTP), are South Western folk; Bristol, Exeter, Cirencester, and purveyors of a fine café experience. Though they hail from the West Country they are slowly but surely growing their organic brand to bring a fresh approach to breakfast, brunch and lunch to other regions of the UK that have yet to experience the delights of a West Country café.

Now, before you shake your head and look dubiously about you, BTP are not farmers with straw in their mouths, but they do have a (adorable) Cornish twang that is terribly twee in the Midlands. Unaccustomed to such charm I met the rather darling MD Sam and head of marketing Ben Hibbard who gave me the low down on BTP and why they’re sticking around.

They like to invest in buildings with character; the venue is fundamental to the BTP vibe, the environment is a chilled and interesting space and they want to keep it as an informal place to relax.

Note – they are a chain, they’re definitely independents, but they’re not so small that they have yet to branch out into other sites. BTP are doing pretty damn well.  Sam points out, however, they’re not a ‘conveyor belt’ of a café where customers enter, you serve them and shout ‘next’ to the person waiting; it’s not like that. The service is informal and the staff establish relationships with their customers.

BTP have twelve café’s in total; most of which don’t feel like they’re in a chain, possibly because they’re all different. Each cafe is slightly different (in terms of décor and art work), but they’re recognisable because of their running theme of simplicity, superb quality food and lovely members of staff. 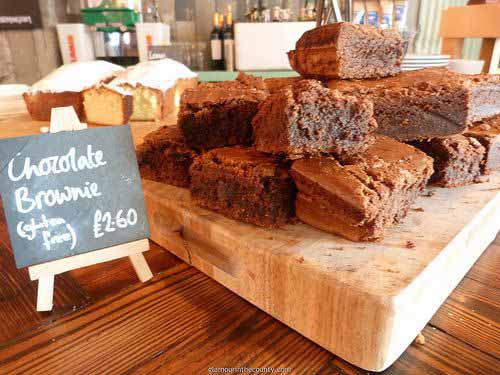 The chalkboard menu on the back wall above the bar is where you’ll find the extensive breakfast list. I have no qualms about breakfast being served all day, especially if it’s done well. Needless to say I ordered, my favourite, Eggs Benedict. Simple, classic, and delicious. It might seem an easy breakfast option, but getting that hollandaise sauce just right is a toughie, many make it too runny, too thick, or under-seasoned. This was a little on the rich side, but still tasty and the sauce made the eggs sing.

They change the menu every six months (like any good restaurant), and their current menu has had a recent shake up. The Chorizo new potato, warm salad has been tweaked in response to customer requests. The Super duper salad is a summer newbie of sweet potato salad and feta.

Drinks-wise they’ll whip you up a smoothie or you can find fresh juices in the fridge. If you’re in the mood for a hot beverage, however, they serve loose leaf tea because it “makes sense”. Sam stressed that BTP is about people educating customer’s palettes. Canton tea provide them with seasonally fresh tea leaves and they serve coffee which is a mix of three blends; Brazilian, Columbian, with an acidic chocolate terra topnote.

All dietary requirements are catered for too. Try the gluten free and vegan cakes, which are just as delicious as the non-GF and non-vegan bakes.

If you’re broke and you only have a bit of change on you here’s what £2.50 will buy: Flat sandwiches, any cake, filled croissants or their infamous bacon and egg tarts. And if money isn’t a problem they recommend the bacon pulled pork wrap or the West-Country breakfast.

Considering the city location BTP is the good value for money in relation to the quality of goods on offer. The eggs are free range, everything is made from scratch on-site and you really can’t get the quality and service cheaper. The MD also quipped they have an ‘emotional viewpoint’ about their customers and welcome an eclectic mix of people.

What really stuck with me though is that BTP listen to their customers: if a significant amount of people make a suggestion about the menu, the recipe will be changed within days. The café itself has a cool, bohemian vibe and is spacious enough for a large group of mates, yummy mummies with prams, and a bunch of office folk who flock there in that pre-work scramble when they’re desperate for a coffee at 8am.

As their marketing manager, Ben, puts it BTP is “like going to a friend’s house; it’s about the people, good food and drink”